4 Concept Cars of the Future – If It Crawls Like a Reptile, It’s a Hyundai Elevate

Electric vehicles are the future, with the sole condition that makers work out the issues of the long charging times and the relatively short range available with each charge. Aptera Motors aims to efficiently solve them with a 3-wheel, solar powered vehicle.

If the name rings a bell, it’s because Aptera has been around since 2008. “Struggling” is a more suitable term for the company, since it repeatedly tried and failed to put out an electric vehicle that would represent a viable option to every other EV out there.

Almost one month ago, Aptera Motors stepped back into the spotlight, this time with an improved idea based on the same prototype it’d been working on since 2008: a 3-wheel, 2-person vehicle that would draw fuel from the sun.

The Aptera prototype is solar-powered, but it can offer extended range with an extra battery that you can charge using any outlet in your home. Designed as a vehicle for commuters, this tiny, futuristic car can only seat 2 and probably has room in the back for a suitcase or a change of clothes, at best. It’s meant to be almost entirely maintenance and cost-free, thanks to the proprietary Never Charge system.

This system may sound like advanced technology, but it’s actually solar panels incorporated into the body of the car – about 3 square meters of them. Thanks to these, Aptera promises 40 miles a day with solar energy alone, which is enough for most commuters.

For those who travel longer distances, an extra battery pack can be added, which would increase the range by 130 miles. The best part is that, with Aptera, you can charge your car using a 110-volt outlet.

Big claims for such a small car

Aptera Motors operates on the idea that the cars of tomorrow need to be aerodynamic, lightweight and fuel-efficient, all at the same time. Its 3-wheel, 2-person vehicle is all of that, with an emphasis on that third attribute: it will run for 11,000 miles per year without impact on performance.

Moreover, the solar panels in the upper part of the body can be replaced or upgraded easily when need be. Maintenance is at a minimum, while costs are virtually non-existent.

“The average driver in the US drives 29 miles per day, so now for most American consumers, the Aptera is a vehicle you never have to plug in to the wall to receive any charge,” Chris Anthony, Aptera Motors co-CEO, says.

“If you put our same solar package on a Prius, you could get maybe six or eight miles of charge range a day, which some people might find compelling, if you have a really short commute. For most people, it wouldn’t be worth the expense of the solar. But when you only burn 100 watt-hours per mile, like the Aptera does, the same solar package can get you 40+ miles a day of range.”

“Our vehicle is unique in that most electric cars you can never really charge off a 110-volt outlet,” Anthony adds. “It’s not enough power to charge a Tesla or Chevy Bolt. But with our vehicle, the same outlet that you use to charge your cell phone can charge 130 miles of range per hour.”

Other technical details are not available right now, but Aptera Motors claims to have been able to bring down the weight of the base model at 1,800 pounds, while the model with the extra battery pack will weigh about 2,200 pounds.

A rough ride, but not anymore

As noted above, the Aptera has been around for over a decade, though not in actual, physical form. At one point, the makers were even forced to return deposits for one of their earlier vehicles, which was either fully electric or hybrid at the time, and they went back to the drawing board.

Aptera is still in prototype stage, but several improvements have been made. For instance, it has only 10 key structural parts, it has a composite passenger safety cell “stronger than that of any other vehicle on the road today” and will include Autopilot for extra ease of use.

This tiny, solar-powered, 3-wheel, 2-passenger car may have had a rough start, but the future appears to be sunny. 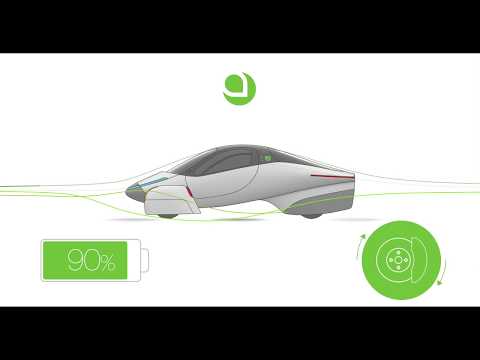