We all know the Shelby GT500 is one hell of a strip-slaying machine, but it has a few notable limitations. First things first, the most powerful road-going Ford is a heavy son of a gun at 4,225 pounds (1,916 kilograms). Secondly, the wheel spin is pretty intense even with Launch Control.
60 photos

The Blue Oval claims 10.7 seconds are enough for the quarter-mile run, but as you already know, “consistency” doesn’t define this fellow. Motor1 had the opportunity to test the 760-horsepower muscle car against the two unlikely competitors, and on the first try, the Polestar 1 loses to the Shelby GT500.

That’s pretty surprising given the 737 pound-feet of torque of the Swedish grand tourer, but then again, don’t forget that internal combustion leaves much to be desired. Four cylinders, a turbocharger, and a supercharger sound impressive at first glance, but as the speed grows higher and the traction gets better, the Predator V8 in the Mustang shows off its mettle.

Versus the BMW M8 Competition, the tables turn in the Bavarian contender’s favor. Off the line, at the halfway point, and across the quarter-mile run, the twin-turbo V8 coupe simply decimates the Mustang thanks to a well-sorted AWD system even though the Shelby is just a little bit lighter.

Motor1 signs off by mentioning “three fantastic drag-racing cars” that bring something unique to the table. From instant torque delivery to advanced launch control to brute force, “each one is supremely fast in a straight line.” 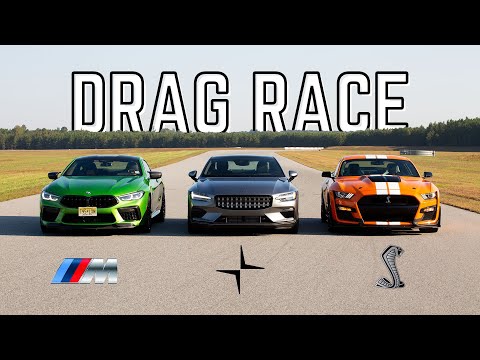