2 Intel's Drone Display at the PyeongChang Olympics, Pre-Recorded in December

5 A Wearable Drone that Flies Off Your Wrist Is in Development
Car video reviews:
Up Next

Back in February, when the XXIII Olympic Winter Games kicked off in PyeongChang, South Korea, IT giant Intel released images of a huge show it created using an army of drones.
1 photo
A fleet of 1,218 such machines was tasked last December with flying in sync and displaying a variety of messages in the skies above the Olympic stadium. The video of the achievement was made public during the opening ceremony of the Olympics.

Last Sunday, some guys in China allegedly shattered that record. In the skies of the capital of Shaanxi Province, Xi'an, 1,374 drones took to the sky in a successful attempt to beat Intel.

The drones in the show belong to Ehang, the same company which back in February conducted the first manned flight of the 184 passenger drone.

According to ECNS, the Guinness World Record handed Ehang the title for "Most Unmanned Aerial Vehicles (UAVs) airborne simultaneously."

The 13 minutes show started with the drones taking off from a narrow city wall to create a curtain of flying machines 1,200 meters in length and 100 meters in width. Sixteen different patterns, as well as Chinese traditional icons, were displayed by the lights on the drones.

Despite the simultaneous flight being a success, not the same can be said about the synchronization of the drones. Just as with Intel’s, these drones use an automated system to make them perform tasks.

The system failed now and then, making the drones drop out of formation and mess up the messages that were to be displayed. Some of them are even seen crashing to the ground.

The cause of the partial failure might be the signal interference caused by the cell phones of the 100,000 people attending the event. But despite the problems, the drones met the requirements to beat the record.

"All the drones must be in the air simultaneously for more than one minute," said Wu Xiaohong from the Guinness World Records according to the source.

"During that minute, if any drone can't perform the job, that drone will be deducted from the total number." 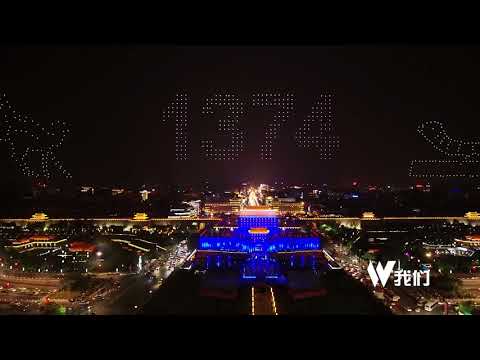