Rock Band Tries Filming New Video in a Moving Van, Gets Pulled Over

Ionut Ungureanu
Some people find it arousing to get intimate in cars, others live in vehicles and yet some simply drive them. But since we’re in the 21st century, which could easily be named the experimental century, new uses of the four-wheeler emerge by the day so there is no telling what’s the next thing that becomes viral.
1 photo
At least that is what the members of the young rock band Secret Broadcast probably were thinking of the moment they decided they’ll shoot a video in a van while the whole crew is on the road. So they took their instruments, probably plugged them in in a small amplifier and started playing. Playing music and driving the car, of course.

The idea was quite interesting, since a band that sounds good in a van while playing live definitely has the talent needed to make it on bigger scenes. But what the members of the Calgary, Toronto band didn’t think of is the fact that doing that could also be considered as reckless driving.

Then, there’s also the part where passengers are supposed to wear a seat belt, which clearly was not the case with the people in question (apart from the driver, of course).

In fact, according to Alberta’s Traffic Safety Act, the law requires all occupants traveling in a vehicle to wear a seat belt and it is the driver’s responsibility to ensure that all passengers under the age of 16 years are properly restrained in the vehicle. Again, not the case with this van.

Since the video doesn’t show how everything ended, we can’t tell you guys if all of the occupants of the van were fined with $115, which is what you get for not wearing the seat belt. To be honest, this whole little video rather looks like a fake scene than an actual thing that happened, but we’ll let you guys be the judge of that. 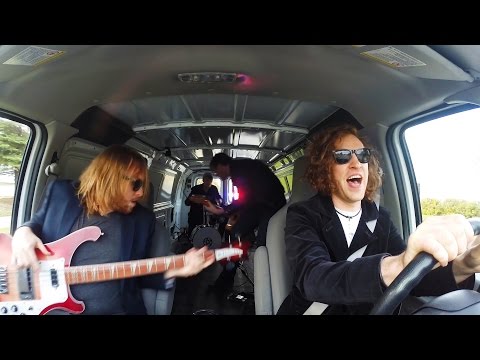