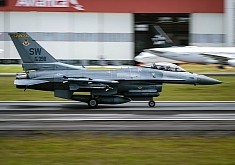 26 Aug 2022, 16:10 UTC / Perseverance found some crucial clues about Mars' past. The rover discovered that the Jezero Crater's floor is made of volcanic rock that interacted with water

8 Jul 2022, 20:26 UTC / NASA's Perseverance rover has successfully collected its 9th sample. It's the first out of many expected to follow from the ancient river delta on Mars

23 Jun 2022, 21:21 UTC / For the past few months, Curiosity has been climbing Mount Sharp, crossing between a clay-rich area and one filled with sulfate

6 Jun 2022, 14:15 UTC / NASA's Curiosity rover has recently spotted two mysterious spikes that looks like the remnants of an ancient tree on Mars

3 May 2022, 21:10 UTC / NASA's Ingenuity helicopter has been scouting the region near the ancient river delta on Mars, providing some interesting images

19 Apr 2022, 19:24 UTC / NASA's Perseverance rover arrived at the ancient river delta and it's ready to collect some unique samples that might reveal crucial clues about Mars' wet past

8 Apr 2022, 01:06 UTC / Mars has a rugged surface that is sprinkled with wind-sharpened rocks, which sometimes take big bites out of the rovers' wheels

9 Mar 2022, 01:11 UTC / NASA Perseverance rover is rapidly expanding its rock collection. The machine has successfully snatched another piece of Mars to carry with it

1 Mar 2022, 17:07 UTC / Recently, NASA's Curiosity rover found an intriguing tiny structure on Mars that looks like a flower covered in dust, growing out of the surface

8 Feb 2022, 14:43 UTC / NASA awarded Lockheed Martin a $194 million contract to design and develop the MAV, a small rocket set to carry the first samples back to Earth

27 Jan 2022, 02:19 UTC / NASA's Perseverance rover has been clogged with pebbles for several weeks now. Turns out a little wiggle was what it needed to get them out

23 Jan 2022, 23:31 UTC / NASA's Perseverance rover has been struggling to get off some pebbles stuck in its components after it collected a sample of the alien soil back in December

NASA Is Slamming Spacecraft to the Ground for a Good Reason

14 Dec 2021, 02:39 UTC / NASA is testing spacecraft and hardware by dropping them on the ground repeatedly. This will help the agency prepare for a future sample return mission

12 Oct 2021, 20:18 UTC / On September 1st, NASA's Perseverance rover successfully took a sample from an alien world that could be returned to Earth by future spacecraft

Take Two: NASA Perseverance Rover Digs Up a Hole on Mars to Collect Its First Rock

3 Sep 2021, 16:36 UTC / NASA's Perseverance rover has drilled up a hole on Mars in a second attempt to collect its first rock intended to be taken back to Earth in a future mission.

Rocks on Road Corners Flipping Cars like Pancakes Since 2016

18 May 2016, 16:44 UTC / A driver fails to spot a large rock hiding in plain sight as he unnecessarily tries to cut a corner, so he ends up like a turtle on its back

9 Mar 2016, 15:53 UTC / For those about to race a car without ear plugs, AC/DC's Brian Johnson salutes you and tells you not to do it, because that is what cost him an eardrum

Janis Joplin's 1965 Porsche 356 C Goes Under the Hammer: Get It While You Can · Photo Gallery

16 Sep 2015, 08:08 UTC / If there's one artist all music maniacs of today and tomorrow must have heard of, Janis Joplin is clearly that person. A legend, she also drove a Porsche

Rod Stewart and Son Alastair Seen Hopping In a Rolls-Royce Ghost: all Smiles