Home > News > U-turn
Ionut Ungureanu
Remember when Jeremy Clarkson borrowed that beautiful Ferrari Enzo, one of only 400 ever produced, and reviewed it on Top Gear. As you probably know by now, that gorgeous work of art is just one of Nick Mason’s jaw-dropping car collection, one that recently got enriched with Ferrari’s newborn hybrid, the LaFerrari in person.
1 photo
In a short interview done with GQ recently, the only constant member of the band since its formation in 1965, Nick Mason discussed a little bit of both worlds that made him famous, rock music and cars. The video report is filmed at the home of the legendary musician, in North London. Here, Mason keeps the two worlds alive as he has both his rare sportscars and some of the famous band’s testimony.

Sure, the famous drummer talks about Pink Floyd’s recently unveiled “The Endless River” album and how it was released into a unrecognizable world compared to the one that greeted the famous band’s last album.

“The world has changed. We can't change it back. Because of the internet and downloading, music has been devalued. Maybe it was over-valued previously, but it's become a real issue now,” Mason explains.

However, soon enough the discussion speeds up towards the drummer’s passion for classic sportscars. As he is referring to his new LaFerrari hypercar, the 70-year old composer said the hybrid technology is stunning and that compared with its predecessor, the Enzo, driving the stunner feels completely comfortable.
Oldies, but goldies
It sure seems old habits die hard, since his love for the LaFerrari he just got, and raced a bit at Fiorano for that matter, won’t ever be bigger than that for the classic rides he owns. “The magic of climbing into that thing for the first time, and thinking ‘wow’. But the LaFerrari is the new supercar paradigm. That said, there’s as much fun to be had in the older cars than the new ones. Sometimes more”.

Nick Mason’s passion for cars is far from being a simple hobby. In case you didn’t know, he owns (through his company Ten Tenths) and races several classic cars, and has competed successfully at the 24 Hours of Le Mans. In fact, his auto collection has been a subject of his 1998 book, Into the Red, in which he documents his experience with his rides, along with some other histories.

Since we’re not trying to spoil anything here, you’d rather get more details straight from the source. Enjoy!

PS: Yes, that drum set is a Ferrari branded set and yes, Mason is touring some of Pink Floyd's seminal locations in a wonderful blue Ferrari California T. 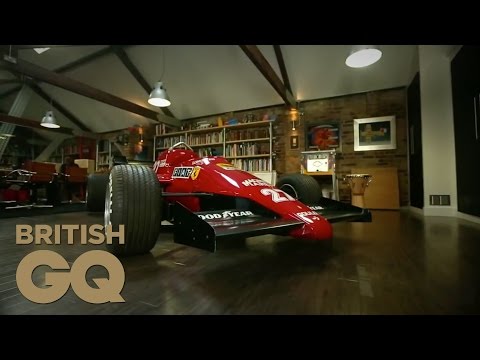