5 Tesla Cybertruck Beats Rivian R1T Across the Board, Still Remains Big and Ugly
Car video reviews:
Up Next

As of Now, All Tesla Model S Long Range Plus EVs Come With 402 Miles EPA Range

Rivian R1T Ad Is All About Family Fun, Will Strike a Chord

In a completely unsurprising move given the international health crisis, Rivian pushed back the release date of the R1T electric pickup truck to a tentative 2021, instead of late 2020.
31 photos

If the long wait is too taxing on you, here’s a little something to keep you going: Rivian has been releasing short videos / ads for its two electric vehicles, with the latest focused on how much family fun the R1T will bring about. Spoiler: it’s probably not what you think.

Rivian calls both the R1T and the R1S Electric Adventure Vehicles, so this most recent ad is about bringing the adventure home – at the Rivian family, no less. This video is meant as a thank you to the families who have worked with Rivian, especially during these trying times, but make no mistake about it: it’s an ad. It’s just packaged differently, in a way that’s bound or meant to tug at the heartstrings.

“As a small thank you, we surprised a few of them at their homes and let them put the final touches on one of our test vehicles,” Rivian says in the description of the video. “To all our Rivian families, we love being on this adventure with you.”

The pre-production R1T was wrapped in white, with outlines of boats, wildlife, trees, and other stuff you normally associate with the adventurous lifestyle, perfect for filling in with color. In short, to promote the truck, Rivian turned it into a giant, rolling coloring book, sending it out to families to leave their mark (quite literally so) on it.

There isn't much any adventure-seeking being done in this video, and it doesn't include any new details or specs. It is meant to build a brand image, and it does so by delivering some fun family content but in a way that doesn't come across as forced.

When the R1T does start deliveries, it will do so with 3 battery options, offering different ranges at different prices, estimated between $70,500 and $90,000: 105.0 kWh with 230 miles of range, 135.0 kWh with 300 miles of range, and the 180 kWh with 400 miles. The mid-range version will start at $69,000, according to a January 2020 update from Rivian, which means the base model will be considerably cheaper than the $70,500 initially announced.  *Update
The article has been updated to include a correction on the estimated delivery price of the R1T. 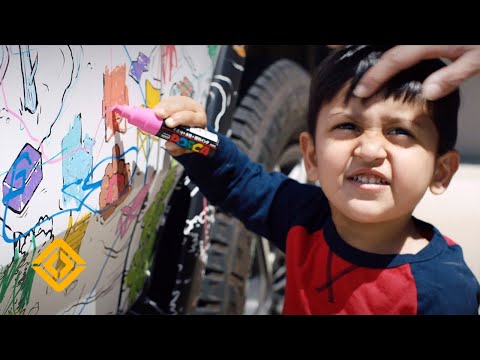