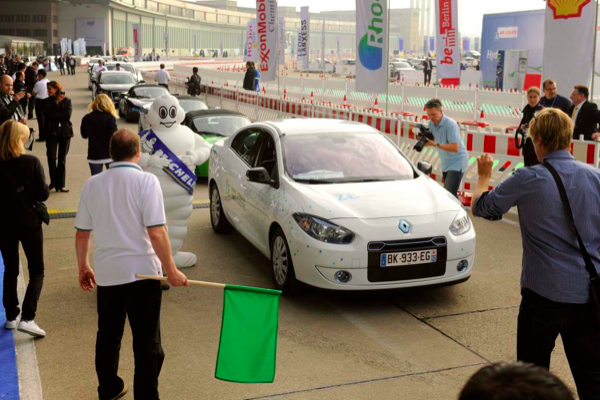 A Renault Fluence Z.E. has taken to the podium at the 300 km inter-city Challenge Bibendum 2011 rally, clinching the victory not only from electric roadsters, but also from hydrogen and fuel-cell vehicles. The Fluence Z.E.’s entire well-to-wheels CO2 output calculated by Michelin’s team of experts, was 57 g/km, or 8% better than the vehicle’s homologation figures.

“We are very happy to have won the challenge ahead of more exclusive competitors. This challenge gave us the chance to exploit all the vehicle’s potential. It’s reliable, pleasant and efficient to drive,” said Gregory Fargier and Sylvie Savornin, Fluence Z.E.’s driver and co-driver.

What’s more the Fluence only needed one battery change halfway through the rally to complete 300 km, taking 6 minutes on the clock.

In addition to this first place, Renault Fluence Z.E. also won 5 other trophies: