4 SEAT Cupra Expected to be Turned Into Performance Sub-Brand

Mihnea Radu
For whatever reason, Volvo decided not to turn its sexy coupe concepts into a production C90 model, as we expected, and instead gave Polestar the green light to become an independent brand. These are the first impressions of their debut model.
3 photos

We don't know everything about the car, but it should cost a lot of money and deliver one of the most complex powertrains ever fitted to a GT. It also weighs about as much as a Bentley Continental GT.

The Polestar 1 has a 2-liter four-cylinder over the nose. It's both turbocharged and supercharged, much like on T6 or T8 Volvo models. The real magic is under the trunk, two more electric motors than on a T8, one for each of the rear wheels, which game the car a total output of 600 horsepower and 1,000 Nm (738 lb-ft) of torque of combined power.

So it has torque vectoring, but most of the power is over the front, which is why the Polestar is being compared to a front-to-back Acura NSX. Performance isn't quite in the same league, with the Swedish sports car taking about 4 seconds to reach 100 km/h. However, it can travel for up to 150 kilometers on its 34 kWh battery alone, which is pretty rare.

Perhaps the most interesting feature we were able to observe here is the suspension system. Many GTs have the air variety, allowing them to cruise over bumps, but the Polestar 1 features an Ohlins setup with shock absorbers that can be adjusted but by popping the hood open and rotating a gold knob. What is this, a Subaru?

The interior feels like the best iPhone with an expensive case. It's just a bunch of good parts from other Volvo models plus a bit of carbon fiber here and there. The exterior is much the same, featuring a design Volvo presented six years ago, but with hints of the carbon fiber construction peaking out here and there. 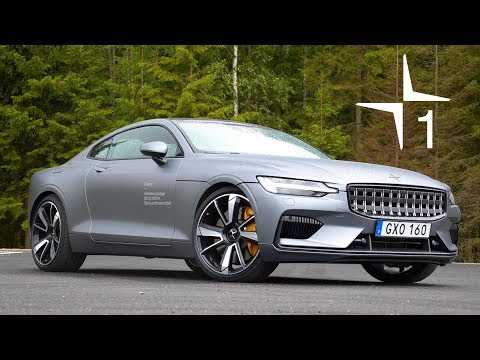