1 A One-Wheel Electric Motorcycle Is a Thing That Exists

A few months ago, while you might have been watching Netflix or HBO, Paul Teutul Jr. reached out to e-bike manufacturer Ruff Cycles to pitch a collaborative project. If you’re a daily visitor on autoevolution, it’s possible you’ve caught a glimpse of the announcement just a few weeks back.

In case you haven’t, the story goes a little like this. Paul Jr. Designs (PJD) is known for producing some of the world’s most famous themed custom motorcycles. Ruff Cycles (RC) is something of a PJD, but more for the e-bike world, responsible for e-bikes like the Ruffian. Eventually, this sort of collaboration had to happen.

Now that it has, what are you to expect? Oh my God! Listen, it doesn’t even matter if you have anything to do with e-bikes or motorcycles, the way this bike looks, performs, and catches the eye is just phenomenal.

The PJD-E Ruffian, as it's been dubbed, is a design modeled after one of PJD’s already existent designs. Since it’s rather difficult to transpose a complete motorcycle design onto an e-bike, only certain cues have been used to give the PJD-E a custom feel.

Being the e-bike that it is, the PJD-E includes more than looks; it’s meant to be at the top of its game in terms of ride experience as well. To complete the frame you see, the aluminum build with powder-coating will ensure a vehicle that will stand the test of time.

At the bottom of the bike, you should be able to spot the motor behind that number "7" wing. Guess who makes its appearance here? Bosch, baby, yeah! The new MY 2021 Performance Line CX motor offers a maximum torque of 85 Nm (63 lb-ft) of torque and up to 340% amplification. That's enough to make you feel like you really are riding around on a chopper.

Powering this massive engine, Bosch strikes again with a PowerPack 500 or PowerPack 300, hidden beautifully in the gas tank. An Intuvia display is integrated into the design and allows you to select between the five different ride modes at the touch of a screen. Shifting is handled by an Nfinity N330 automatic system from NuVinci enviolo. Just a twist of the wrist, and this gearset does the rest of the work automatically, whether you’re under load, doing a wheelie, or just cruising around.

Overall, the bike can reach speeds up to 25 kph (15.5 mph) Why so slow? Because for now, this beauty is being shipped only to Europe, and they don’t seem to like speed over there, oddly enough. How far you’ll be able to ride is a bit difficult to say as road conditions greatly affect your range. In any case, hydraulic disk brakes are available to slow you down if things get out of hand.

The only suspension you’ll find consists of the RC Ruffer tires. The fork looks like it might produce some dampening but doesn’t. CrMo legs are supported by RC aluminum bridges for a solid look.

The rest is all down to design. I love how the battery was integrated into the tank, the low and open feel of the frame, and yes, even that batwing that seems to serve the purpose of protecting the motor. The red rims stand out vibrantly against white-wall tires with a black tread, and that same color scheme resonates throughout the rest of the bike. 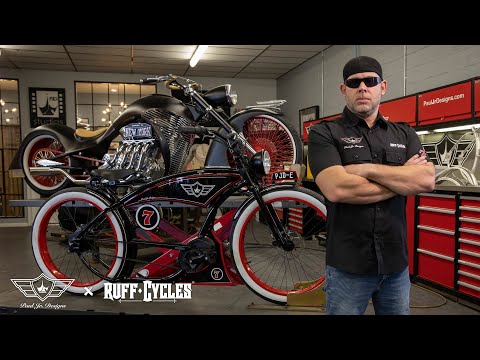