1 $70 Million 11.11 Custom Superyacht Is Being Sold Because It’s No Longer Enough

2 A Yacht for Your Toys, When Your Superyacht Isn’t Enough: The Lynx YXT 34

3 Osseo, the Performance Sailing Yacht Perfect for a Millionaire Pirate

Olokun, the Gleaming Black Superyacht Darth Vader Would Love to Have

Elena Gorgan
Looks aren’t everything in life, but who are we kidding, they sure do matter a lot. In the looks department, this superyacht is a true standout.
5 photos

As cool as they look, you don’t see that many black superyachts out there, for practical reasons. This alone would make any dark-colored luxury vessel stand out from the crowd, but Olokun, the latest build from the Tankoa shipyard, has a lot more going in its favor.

Olokun was launched in September this year in Genoa, and is currently undergoing sea trials, for which reason it’s still considered under construction. It’s the third 50-meter (164-foot) vessel from the shipyard in the semi-displacement, all-aluminum line and it started out very much like its predecessors. That is to say, it was meant to be a “regular” luxury superyacht until the owner came into the picture, with a set of very precise instructions.

These included the gleaming black paint scheme, which makes this the kind of vessel Darth Vader would kill to have. Olokun, unlike the vast majority of yachts, be they plain or of the super- / mega- variety, has a black hull and gray superstructure, and has a matching interior. Exterior design is by Francesco Paszkowski, while the interiors are by Casa Dio.

This being a new build that hasn’t even been delivered to the owner (he will be taking delivery of it this November), photos of the interior haven’t been released to the media. But Tankoa CEO Vincenzo Poerio does say this: Olokun is a semi-custom job, given that the owner wanted to stray from the standard model that was used in the two predecessors. Tankoa is a “boutique” shipyard and, as such, they were able to accommodate these requests.

They didn’t come without challenges, as Poerie himself explains in a recent interview with Boat International.

“We started the project on spec and the owner came into the project quite late during construction, but we wanted to tailor the yacht to his personal needs,” Poerio says. “The second cabin connecting to his own suite on the main deck is a good example. It meant cutting a hole in the bulkhead and re-routing all the wiring so his private office could be converted into a cabin.”

Another modification consisted of moving the dining room from the main deck to the upper deck, creating more socializing space in the salon on the main deck. Other standard features remain, like the fold-down terraces in the owner’s suite, the beach club at the transom and the side-loading tender garage.

In order to apply the black paint on the hull and have it look as impeccable with long-term use as it does on delivery, Tankoa had to make extra provisions. Poerio explains that another layer was applied to mitigate heat absorption of the black color, which will reduce the temperature of the hull by 10 degrees Celsius, while a clear layer will protect the black from scratches and discoloration.

“It gives the yacht a very modern feeling,” says Poerio. “The owner was so happy that he is having his chase boat painted the same color.” So not only will the interior match the unique paint scheme, but also the tender. It’s all very modern, alright. And rich.

As of the moment of press, Olokun is undergoing sea trials and is having the interior completed. Expect more coverage when the owner (who is probably not Darth Vader) takes it out for its maiden journey: a looker like this one can’t possibly go unnoticed. In fact, it was made to have all eyes glued to it wherever it goes. 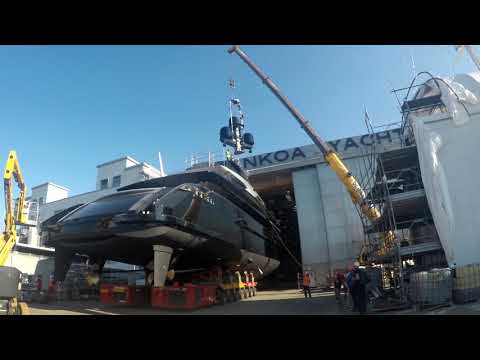 Airbus A320neo: The European Twin-Engine Airliner That Dunked All Over BoeingSee all coverstories