Piece of Asteroid Heading for Earth in a Spacecraft, Because They Do That Now

The Nissan Armada—or Patrol, as it's known elsewhere—has just received a much-needed facelift that manages to make its appearance seem more contemporary, though when you start to pick it apart, it still looks quite dated.
46 photos

This model used to be one of the off-road kings, giving the Toyota Land Cruiser a run for its money. In the meantime, though, it slowly turned into a run-of-the-mill SUV that looks somewhat rough but is only just a glorified family car in reality. Gone are the days of Patrols wearing stickers taunting Toyota's off-road abilities, and that's not because the two aren't competing anymore, but simply because the playing field has changed from a rocky trail to the school drop-off and pick-up lane. Nowadays, the stickers should read, "My Nissan drops the kids quicker than your Toyota".

Just in case there was any doubt over the Nissan Patrol's (we'll just use this name instead of jumping from one to another simply because it's what the author of the rendering used as well) departure from its once core values, the full-size SUV can be bought with a special NISMO package. As you would expect, the latter does absolutely nothing to enhance its rock-crawling capabilities. What it does is to make the brick-shaped vehicle look like it's going through a violent mid-life crisis where it refuses to acknowledge what it is, pretending instead it's a sports car.

Well, some people in the U.S. must have been frustrated by the fact this optional package is only available in the Middle East, so they asked Marouane Bembli (a.k.a. The Sketch Monkey) to take things one step further and design a face swap between the Patrol and the Nissan GT-R. A Nissan Patrol GT-R NISMO, if you like.

The result speaks for itself. Some people like it; others have a bit more common sense and don't. However, that's not to say it's not a better fit than the actual Patrol NISMO. That almost perfectly vertical nose of the real SUV will never scream "sportiness" no matter how many splitters, vents, and red stripes you add, so Marouane rounded it off a little, adding the GT-R snout and headlights. All in all, it makes for a more convincing sporty SUV, even if more than zero doesn't necessarily mean that much.

You can watch the whole transformation and listen to a breakdown of the thought process behind every decision in the clip below. 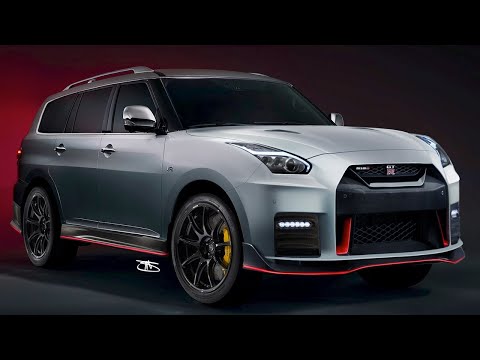