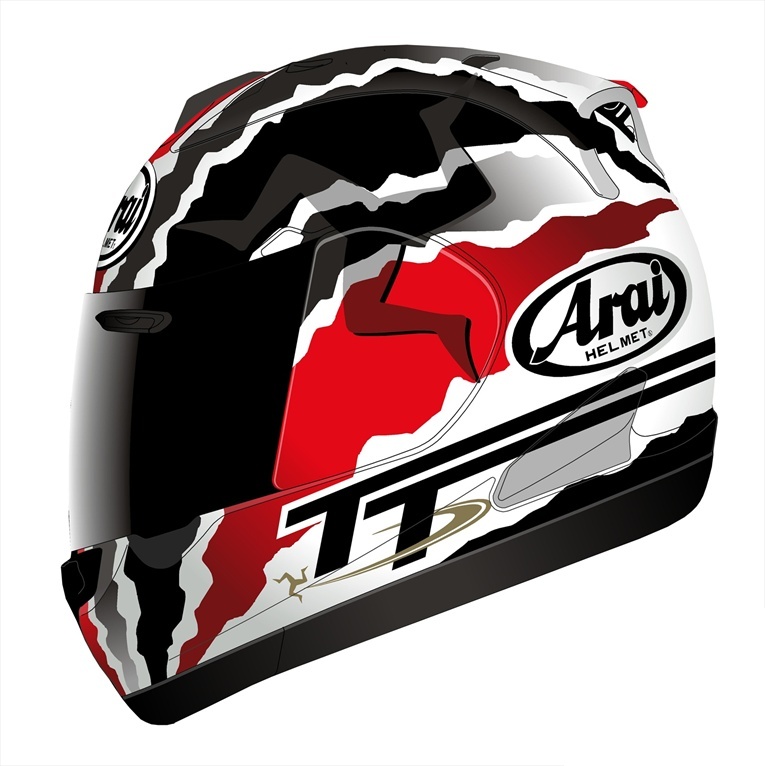 Helmet manufacturer Arai has announced it is expanding its RX-7 GP helmet range in the UK with the addition of the Doohan/TT and Haga Monza White limited editions. Both of these variants will be available on an order only basis directly from any Arai Five Star dealer and deadline to place orders will be May 14, 2011.

Every year a very special guest is invited to the Isle of Man TT to ride the legendary lap of honour and for 2011 Arai has invited no one less than Mick Doohan. Doohan is best known around the world as five times MotoGP World Champion (1994-1998) and during his career he always woreArai. Several MotoGP riders will join Doohan during the ‘Arai Lap of honour’.

His famous red, blue and white striped helmet with Koala bear cartoon on the back has become iconic – and Aldo Drudi has designed a limited edition helmet for this special occasion in white, black and red incorporating the TT logo, plus ‘Three Legs of Man’ details and the essence of Doohan’s original paintwork.

On the other hand, the black, limited edition Haga Monza was a tremendous success in 2009. Noriyuki wore this design at the Italian World Superbike race. All of the original Monzas sold very rapidly and thus inspired the brand new RX-7 GP Haga Monza ‘White’.

This version is also designed by Aldo Drudi and draws inspiration from its black predecessor. It features the circuit layout, its latitude and longitude as well as his NKI 41 motif. Haga, racing his PATA Aprilia RSV4 will wear the new design during the Italian World Superbike round at Monza, which takes place on May 8.