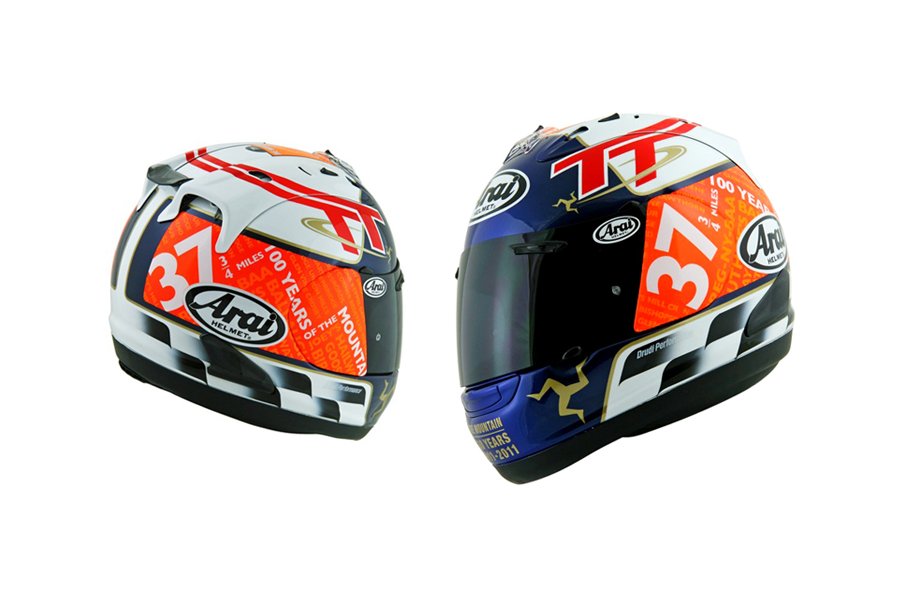 Renown helmet manufacturer Arai decided to launch its limited edition Arai RX-7GP TT helmets that were first introduced in 2010 to honor the Isle of Man TT organization. The company has once again commissioned Italian designer Aldo Drudi to envision the helmets that this year celebrate “100 Years of the Mountain Course”.

The second edition model comes with an orange-white-blue paint scheme, together with the official TT logo and the world famous three-legged triskelion symbol. This is a completely road legal helmet that can be used on the road or track without any restriction.

The 2011 Arai RX-7 GP TT helmet model will come in a limited production run of 500 units for Europe, and according to the manufacturer, the Isle of Man TT organization receives a commission for every helmet sold.

In order to make this support programme possible, all parties involved (Arai Japan, Arai Europe, Phoenix Distribution) agreed to minimize their margins significantly. The 2011 Isle of Man TT Series edition is priced at EUR899 (euro price including VAT - GBP699.99) and will be exclusively distributed by Arai’s UK importer Phoenix Distribution through their dealer, Crossan Motorcycles.

This second edition is initially offered to the owners of the first edition, which was sold with a special three-helmets display. Any remaining 2011 edition helmets are offered for purchase during the Isle of Man TT races itself.

The special edition is based on the Arai RX-7GP model, which brings an adjustable “Air Wing’’ spoiler, a “PB-SNC’’ outer shell (35% stronger than standard fibre) with a special belt construction, and Emergency Release Pads.