4 The U.S. Should Bet on Green Hydrogen for Zero-Emissions Shipping, New Study Shows

We haven’t seen such a revolutionary concept since the nuclear-powered Earth 300. Looking like straight out of a Sci-Fi movie, this massive ship is not only completely self-sufficient and emissions-free, but it’s capable of conducting scientific research missions and rescue operations, while also acting as a floating power station for other clean ships.
8 photos

There are plenty of green projects meant to cut CO2 emissions related to maritime operations, ranging from the use of different alternative fuels to hybrid-electric propulsion systems. But some researchers suggest that the solution is much more accessible than we think, and it’s based on a naturally-occurring metal that’s abundant in the soil. The Thor vessel was not named after a Viking warrior, but after this metal, known as Thorium.

Thorium Molten Salt Reactors (MSR) dissolve Thorium in liquid salt. The reaction produces steam, which then drives a turbine and generates electricity. Apparently, this is the first time that MSR is integrated in a ship design, and the one responsible for it is Ulstein, a Norwegian ship builder that’s known for its technologically advanced creations.

Using this unique method of generating electricity, Thor would stay self-sufficient while also generating enough power to replenish four expedition cruise ships at the same time. This would be Thor’s main function, but it’s designed as a 3R vessel – for replenishment, research, and rescue. Sporting Ulstein’s acclaimed X-Bow design, the 149-meter (489 feet) not only looks luxurious and rugged at the same time, but it unveils top-level capabilities.

In addition to laboratories and a lecture lounge for scientific research, Thor comes equipped with several workboats, autonomous surface vehicles, and even airborne drones. Helicopters can take off from and land on its dedicated pads. For rescue operations, it features rescue booms and firefighting equipment.

Thor is also joined by Sif, a concept expedition cruise ship designed by Ulstein. A bit smaller than Thor (100 meters/328 feet) and able to carry 80 passengers plus 80 crew members, Sif would run on next-generation batteries, using Thor as a mobile recharging platform while at sea.

Ulstein representatives believe that this multi-purpose MSR ship has the power to herald a “new battery revolution.” Jan Emblemsvag, Professor at the Norwegian University of Science and Technology backs that up, stating that MSRs are, in his opinion, “the only credible solution for a zero-emission fleet.” That’s a bold claim, and Thor itself is bold enough to prove it. 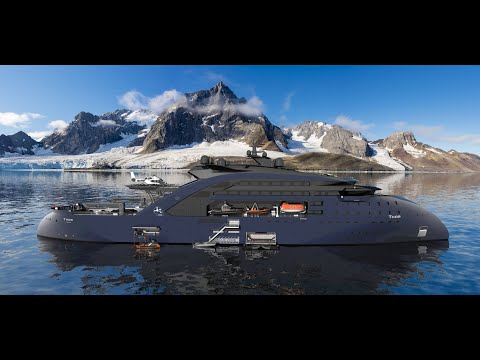