Can you picture an entire wind-powered fleet leading the way to carbon-neutral maritime transport? This is the image envisioned by the International Windship Association (IWSA), which is now joined by a new, prominent member: Michelin.
7 photos

There are several routes that can lead to maritime transport decarbonization, including biofuels and hydrogen-electric propulsion, but wind power is one of the few that’s “non-controversial,” as Michel Desjoyeaux says. He is not only a famous skipper with a lot of experience, but also the ambassador of Michelin’s WISAMO project. Launched earlier this year, WISAMO is seen as an innovative wind propulsion system that can reduce the shipping industry’s environmental impact, without affecting performance.

Now, Michelin has taken another step in that direction, by joining IWSA, a non-profit organization that brings together ship builders, maritime associations, government representatives, and companies in the industry, with the purpose of promoting wind power as an eco-friendly solution for all types of vessels.

The next step for Michelin will be to begin producing the WISAMO system, which is set to happen as soon as 2022, after trials will be completed. This wing sail system that combines the ancient sailing technique with modern technology, for increased performance, is automated, telescopic (so that it can pass under bridges and enter harbors easily), and inflatable. It was designed by the Michelin Research & Development team, together with two Swiss inventors.

The system was also meant to be highly versatile. It can be installed on merchant ships, as well as leisure vessels, and it’s particularly suitable for ro-ro (roll-on/roll-off) cargo ships, bulk carriers, plus oil and gas tankers. Another advantage is that it can be installed on new ships, or retrofitted on older ones. According to Michelin, WISAMO could improve a ship’s fuel efficiency by up to 20%.

Considering that the International Maritime Organization (IMO) will only make toxic emissions regulations even harsher in the future, this modern sailing system could be one of the most reliable and cost-effective solutions for green maritime mobility. 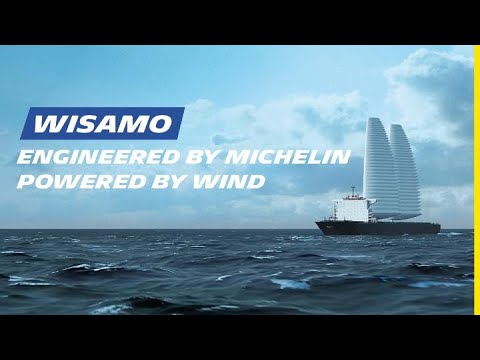