Mercedes-AMG A53 Spied With Panamericana Grille and Quad Exhaust

After the successful launch of the all-new A-Class compact hatch and sedan, Mercedes is probably quite near to showing the AMG versions as well. Unlike before, there will be two of them, and this spy video shows the most powerful in detail.
3 photos

The A45 came out several years ago with a 360 horsepower 2-liter turbo that rocked the hot hatch world. A mid-life facelift saw its output increased to 381 HP. We know that the new pocket rocket will use mild hybrid technology likely to be branded EQ boost.

The output will rise to over 400 horsepower exceeding that of bigger performance cars like the Audi S4 and AMG E43.

How can we tell that it's the hardcore model we're dealing with? Well, the spy video clearly shows the Panamericana grille design, which they wouldn't use if it weren't the flagship model of the range.

Also, the rear of the prototype boasts a quad exhaust system with round tips, similar to the one used by the CLS 53. Previously filmed A40 models had only two smaller mufflers. The shape of the camouflage suggests a diffuser, side skirts, and a chin spoiler have already been added.

However, we wouldn't be surprised if an even more hardcore version comes out, either for the Edition 1 or as part of a performance pack.

As for the names, we're going off a patent registered in February that suggested AMG models without special engines would get a 0 at the end of their name: CLA 40, SLC 40 and GLE 50. Meanwhile, the fact that both the CLA 53 and GLA 53 have been registered suggests the four-door coupe and crossover will continue to share the pinnacle of 4-cylinder performance with the A-Class. 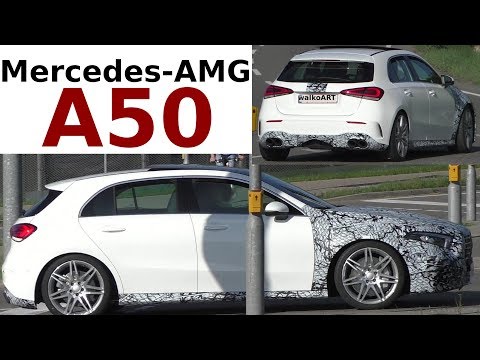