3 What Rotary Dreams Are Made of: Story of a Single-Turbo FD RX-7

5 Twin-Turbo BBC Mazda RX-7 Drags Wheelie El Camino, Both Have a Christmas Tree on Top
Car video reviews:
Up Next

Custom 1986 Chevy S10 Sports Mysterious Engine Under the Hood, for Sale for Cheap

The most popular series-production car with a rotary engine is the RX-7 series, which spans three generations from 1978 through 2002. During this period, the Hiroshima assembly site produced 811,634 examples.
23 photos

Notorious for the momentary dip to eight pounds of boost, the 13B-REW engine is complemented by either a five-speed manual or a four-speed automatic. The final generation of the RX-7 was developed specifically to handle, hence the 50/50 weight distribution as well as the low curb weight.

Very popular among rotary enthusiasts, the FD saw a mainstream revival of sorts in 2001 with the help of a street-racing movie known as The Fast and the Furious. You know, the VeilSide-kitted car raced by Dominic Toretto.

Augmented with pop-up headlights and countless market-specific special editions, the FD ended production with 68,589 units to its name. An orange-painted model served as inspiration for the virtual redesign in the featured video, and obviously enough, fixed lights aren’t as cool as pop-up clusters.

The Sketch Monkey has also worked his magic on the front bumper and lower front grilles, bringing them closer to the RX-8 that replaced the RX-7. Low-profile tires mounted on twin-spoke wheels, extended side skirts, a sharper vent on the driver-side front fender, a lowered butt, restyled wing endplates, and a rear wiper delete also need to be mentioned, along with LED taillights, two massive exhaust tips, and a black-finished rear aerodynamic diffuser.

Even though it looks generic next to the original, this design study isn’t only wishful thinking. Mazda has recently filed several patents in Europe for a rotary-engined vehicle that appears to be a coupe with hybrid tech, which gives RX enthusiasts a glimmer of hope for a brand-new RX sports car. 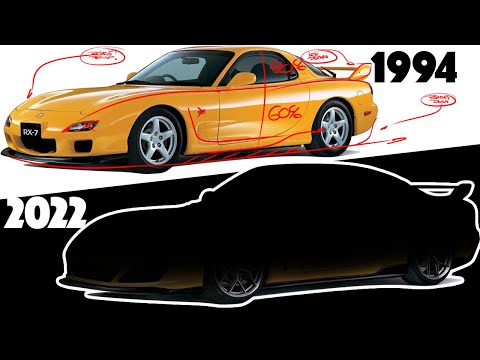