3 Rowan Atkinson Bends Over For His SLS AMG

Home > News > Tuning
Alex Oagana
In recent years, with the advent - or should we say propagation – of car spotters who run around mostly in packs with HD cameras in their hands to capture all the world's supercars on the road, it also seems that certain supercar owners have started to modify their cars in order to be filmed by as many car-spotters as possible.
1 photo
That is mostly speculation, of course, but we wouldn't be surprised to find out that certain supercar owners bling their vehicular prides and joys simply to get the attention of teenagers with cameras, who then upload the videos of their finds all over YouTube, thus increasing the attention that hovers above the said cars on a global scale.

We don't know if that is the case with the following Mercedes-Benz SLS AMG owner, but he sure seems happy to rev the hell out of that M159 monster in front of the cameras.

The car is apparently sporting a set of Vorsteiner wheels, a Supersprint exhaust system that can probably raise the dead and some engine modifications by PP Performance, which allegedly raise the epic-sounding powerplant's output to no less than 670 bhp.

In short, this SLS AMG is a proper hoon-mobile that could probably paint a nice Picasso-like picture with its rear tires on an empty airport strip.

Our only problem with it is the fact that its owner doesn't keep the hooning on the track and uses the exaggerated amount of decibels from its car's exhaust to distress every living thing in the London neighborhoods where he's driving. 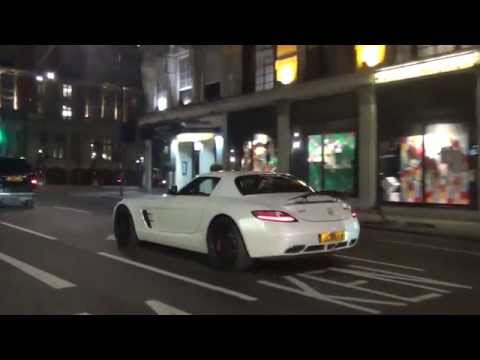