5 Two AMG Black Series Create Havoc in London
Up Next

Daimler Gets Over Three Billion From Rolls-Royce

Home > News > Tuning
Alex Oagana
Now that the Mercedes-Benz E 63 AMG only comes with 4Matic flavor in the United States, many owners of the pre-facelift model have taken their cars to respected tuners in order to keep up and even surpass the newer one, which launches like a bat out of hell thanks to its all-wheel drive.
1 photo
The owner of the 2013 E 63 AMG in the following video did just that, taking his rear-wheel drive car to RENNtech for an intermediate ECU tune, after which fitting a pair of BMC sports air filters and RADO downpipes.

The result of the mild modifications are surprising to say the least, as the car is purportedly delivering no less than 630 hp and 996 Nm (735 lb ft) of torque... at the rear wheels, which in essence should make it one of the fastest E 63 AMG models in the world.

In a drag race from a roll, it would obviously obliterate a stock a MY 2014+ Mercedes-Benz E 63 AMG 4Matic, even in S-Model trim, but against a modified SLS AMG Black Series it is an entirely different business altogether.

This is mainly because the red SLS AMG Black Series in the video below has no less than 600 hp at the rear wheels, courtesy of a Weistec ECU tune and a pair of longtube headers.

Compared with the aforementioned E 63 AMG, this SLS AMG has a bit less power and much, much less torque – because it is naturally aspirated – but it is also quite a bit lighter and has better gear ratios.

On which would you put your money on in a half a mile drag race from a roll, before actually clicking play? We would have lost the wager, by the way. 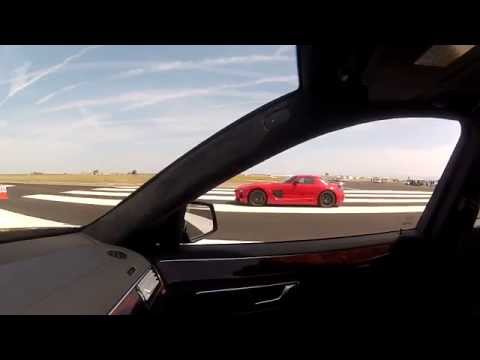