Gabriel Brindusescu
For about 8 years, supercar owners have met in UK at the Supercar Event held at Dunsfold Park (a.k.a Top Gear’s Test Track) to celebrate automotive technology, have a cup of tea, ride the hell out of their machines and raise money for charity. Who said burning petrol kills? It actually helps children.
1 photo
As with each edition, the event, also known as “Dads Day Out”, brought enough eye and ear candy to mess around your sensed for good - tons of Ferraris, Lamborghinis, Ford GT 40s, Ariel Atoms, Porsches, Zondas and of course Lexus LFAs.

Well it was only one LFA, but still, that’s enough to feel the brand’s presence, which, by the way, also sponsored the event. It may not compete with current supercars regarding outrageous styling, but that V10 engine surely knows how to scream properly.

However, this LFA was kinda special, because it took around 8 passengers per day round the track for £100 ($170/€125), with all the money being sent to The Children’s Trust.

Needless to say there were many people left in sourness because of the ride’s limited availability, but those a bit brighter still found a way to immortalize the opportunity. Like this guy that sticked his GoPro camera on the back of the LFA to record its 4.8-liter V10 engine singing the song of its people while going round the track.

Grab some solid headphones and let it scream your brains out in the video bellow. With only 500 units worldwide, you might not know when your head will be that close to its exhaust. 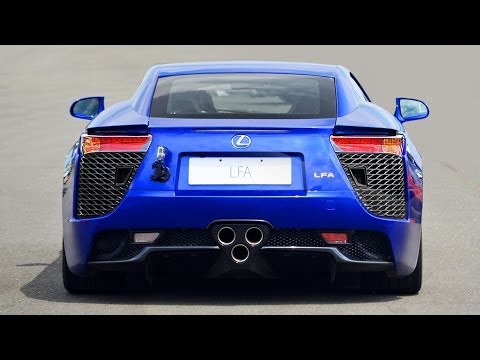