5 Concept Cars of the Future: Lexus Hikari Is Electric, Autonomous, Shape-Shifting
Car video reviews:
Up Next

Apex Predator Is One Sportster Harley-Davidson Should Start Making

Vertical displays such as the ones in the Tesla Model S have become increasingly popular these days, so third-party device makers are trying to make the most of this customer appeal for everything touchscreen in their cars with a series of aftermarket units.
45 photos

In other words, if you like the vertical screen that’s available on the Model S, you can very well install one in your car too, as long as you find a third-party version that works with your daily driver.

The Lexus GX 460 right here, for example, has been upgraded with a 15-inch Tesla-style screen that also replaces the air conditioning controls, and by the looks of things, everything appears to be working just fine.

While the unit is pretty responsive overall, there are features that need additional refinements, including the air conditioning system, which appears to encounter some sort of lag when the on-screen controls are touched. Of course, this is something that can be further polished with software updates, but other than that, the whole system looks like a welcome upgrade for an old car.

Of course, the new head unit also comes with support for other equipment installed in the car, including parking cameras, so when the car is in reverse, the screen switches to the camera to display real-time images and help you park safely.

Navigation apps are also there, and so are music apps, which means that you’re getting a fully-featured experience with such a head unit upgrade.

The price of these vertical screens depends on a series of factors, including not only the car that you want to upgrade, but also the display size and the manufacturer. And of course, there are plenty of models out there on sites like eBay, so if you know where to look, you should be able to find the right head unit at a good price regardless of your car. 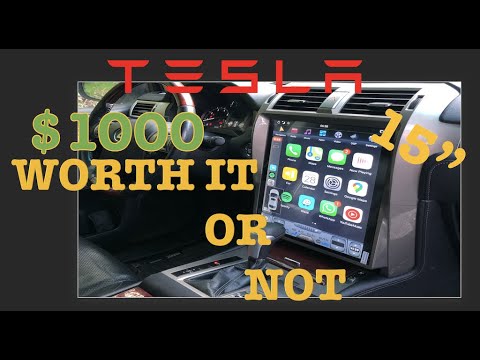