1 The Mountain Tiny Home Is Minuscule, Has Glass Roof and Skylight Shower

2 Tailored Tiny Is a Striking, Gorgeous, Jet-Black Home That Will Blow Your Mind

4 Cyril the Tiny House Is Tiny Only in Name, Has a Full Office and Cat Add-Ons

Kurt Hughes is a boat-builder in the traditional sense: he designs and builds catamarans in Seattle, Washington. Deep down inside, though, he’s always dreamed of being an astronaut.

That dream was shattered early on in his life because of his shortsightedness. It hasn’t stopped him from dreaming, though.

In the late 2000s, he drew for his daughter a Lunar Lander that was more than practical; it was comfortable, too. That gave him an idea: what if he built a Lunar Lander-inspired tiny home on earth since he would never fly to space? As he explains in the video interview at the bottom of the page, this thought was preceded by his realization that most tiny houses were ugly and not that impressive, not to mention heavy to boot.

Hughes wanted his tiny to be Apollo-like in aspect, interesting to look at, and have a minimal footprint. At the end of six long years, he had it—and it was also fireproof, ultralight, and incredibly comfortable.

Hughes’ tiny sits on the Columbia River in Eastern Washington. He’s always felt a connection with the river, and he wanted a fishing house by it, even though he doesn’t fish. His tiny, as outer-wordly-looking as it was, turned out to be a perfect fit for the area.

The house sits propped on three legs, completely suspended in the air but anchored down. When he was just getting started with construction, the bottom half was swept away in a tornado and carried off. It wasn’t damaged at all, but Hughes knew he couldn’t have that happening once everything was put together. Now anchored, the tiny can withstand winds of up to 100 mph (161 kph). And it’s also fireproof. And very light—so light that he could move it someplace else by forklift.

The entire structure weighs just 2,000 pounds (907 kg) and uses carbon-fiber structural insulated panels (SIPs) that Hughes created based on his boat-building experience. They use a mix of vacuum-bagged plywood and epoxy, which he calls “Ziploc Space Bags.” The resulting construction, “technically a hexagon,” is as tough as if it were made of steel but infinitely lighter.

The interior is just as surprising as the exterior, and comfortable too. You have two levels: the bedroom area and the living area. Access is done through the upper side into the living area: you have a complete kitchen with all necessary appliances for longterm living, a bathroom, and some space to move around. The highlight here is the dinette, which is shaped like a nook overlooking the river. Here, you can sip your coffee or grab a meal while taking in the views, and know that, should all gravity suddenly disappear, you won’t bang your head because Hughes installed anti-gravity padding.

The entire place is actually packed with such awesome touches. The sink lights up at night, so you know where it is. You get to peek outside through actual boat portholes. The number of the house uses the same American Captain Patrius font as the one used on the original Apollo vessels. The stair that leads down to the bedroom is actually the longest staircase available for boats.

Since we’re on the topic, the bedroom is situated on the bottom level, so you have to climb down the stairs to access it. It is perhaps the least interesting area in that you only get a queen-size mattress, one shelf, LED lighting, and two small windows to peer out of.

In total, this tiny house shaped like a space vessel and built using boat-building methods offers 250 square feet (23.2 square meters) of living space. It has plumbing, running water, and electricity, so it offers all the comforts of home in the most unusual and awesome setting. Or, as Hughes once said in an interview, “I wanted an homage to an era when anything was possible.” You do get that feeling when you’re inside this tiny.

To other tiny home lovers, Hughes offers downloads of the builders manual for a fee. 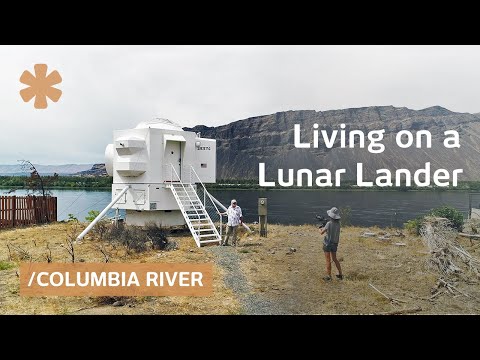