3 Man Gets Trapped in a C6 Corvette with Dead Battery, Calls 911

Home > News > U-turn
Ionut Ungureanu
In a crazy ride for yet another funny stunt, comedian Jimmy Kimmel has turned into an Uber driver for the latest episode of his famous ABC late-night talk show, the other day. His first customer turned out to also be the man he’d assist at a souvenir-shopping spree, as the man spent his last days in America, before returning to his home town in Gabon, Africa.
1 photo
As you’d expect, the entire venture turns out to be quite hilarious. Even though the Uber customer had plans to buy gifts for his family and friends back home, he ends up doing right then, as Kimmel suggests they go shopping and turn the ride in “the weirdest Uber ride he ever had”.

Things get a lot more interesting when the two end up in The Hollywood Experience shop, a gift shop that carries Hollywood-themed souvenirs and presents such as postcards, hats, mugs and what not.

Even though he was supposed to only assist the man, Kimmel keeps stuffing random things into the shopping-cart, such as Justin Bieber T-shirt, scale model cheap Oscar statues-replicas for his family and a Britney Spears DVD. The cameras film their little adventure as the famous comedian does not miss any chance of making funny jokes.

In the end, Kimmel takes the Gabonese home and wishes him a safe trip back. “Best ride ever,” the man says as he thanked Jimmy for the Uber experience. The video ends with quite the emotional theme, but we’ll just leave you discover it yourself.
Uber and its smart way of advertising
This thing with celebrities turning into Uber drivers turns out to be quite the deal for the company, who is quickly growing into a giant corporation. Famous people such as Joe Jonas or Deadmau5 have already turned all the spots lights to the ridesharing based in San Francisco. 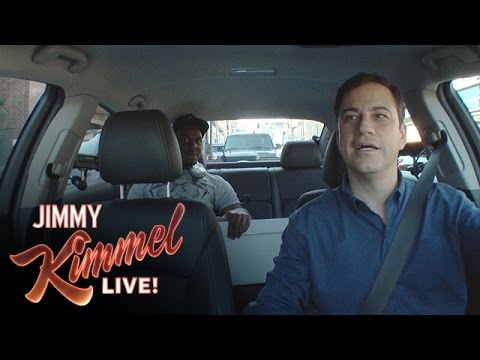