3 Battle of the Infotainment Screens: Which Car Has the Largest One?

Is the 2020 Genesis G90 a Bargain Compared to the Mercedes S-Class?

Even though the Genesis G90 refresh was unveiled in South Korea last year, it's only now becoming available in the United States. Seeing as it's the first to sport the new Genesis face and several fresh features, we wanted to know if it can finally play at the top of the luxury game.
1 photo
And what better car to compare it against than the Benz? This segment is named after the S-Class, but Genesis owners often tell us how brilliant they think Korean cars have become and that Mercedes is robbing us blind.

So, is the refreshed G90 a half-price S-Class alternative or just another wannabe? The guys at Throttle House tried to answer that pressing question and got access a little sooner because they live in Canada.

On the other hand, the 2020 Genesis G90 comes standard with a 5-liter V8 that's not turbocharged and delivers 420 hp plus 383 lb-ft (520 Nm). It sounds awesome and promises a pure experience, but the power and performance aren't there.

However, the reviewers point out that the G90 has got plenty of poke, while the 5-liter gives the car a classic, linear acceleration. It's pretty hard to leave aside your badge snobbery. The Genesis is also the very definition of having all the bells and whistles. Do you want an acre of fine leather? You've got it. In Korea, this is what all the big CEOs drive, and they seem to know what they're doing. Words like "incredibly relaxing" are used to describe a long drive in one of these. So yes, it really is a worthy alternative to the S-Class. 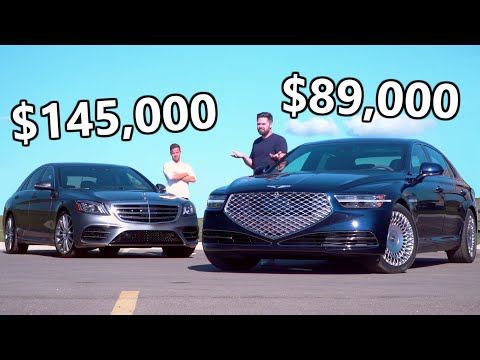