4 NYPD Reports Another Massive Rise in Vehicle Theft, Surprises Nobody

Cristian Agatie
Catalytic converter theft is on the rise across the country, but Southeast Texas has seen the worst of it in the past months. A recent police bust has led to the recovery of hundreds of stolen converters stashed in seven homes across the Houston area.
6 photos

According to Houston law enforcement, the gang of thieves operates at scale by advertising price lists for different models on social media. This has attracted a lot of “cutters” looking to make a quick buck. A total of 477 stolen catalytic converters and over 2,800 oxygen sensors were cut off cars and trucks parked within a hundred-mile radius of Houston, TX.

It took a joint task force organized by the Harris County Sheriff’s Office, the Texas Department of Public Safety, the Houston Police Department, and the US Customs and Homeland Security to bust the gang and find the stolen converters. Five people were charged with the felony thefts, including the leader Armando Martinez Sr.

“Martinez is a mid-level or mid-tier buyer that was part of a sophisticated organized criminal entity engaged in cutting, purchasing, and selling the stolen converters,” KHOU 11 reported. “They were advertising on social media. They would post price lists with different models the gang was interested in purchasing.”

Dozens of cutters started pulling up to sell between two and ten stolen catalytic converters each to the gang. Martinez Sr. would export them out of state to be sold either as usable part replacements or for the rare materials inside. Most valuable are rhodium, which sells for $14,500 per ounce (around $500 per gram), and palladium, which is trading for $2,150 per ounce ($76 per gram).

If you’re curious, the most sought-after catalytic converters were those on the Toyota Tundra, with the Japanese model being the main target of the cutters. If you get your cat stolen, you are looking at anywhere between $1,800 and $3,000 for a replacement. This is, of course, a lot more than what the thieves make on them. The real problem is not that they are costly to replace, though. Finding a replacement is also very hard, considering garages are overwhelmed by demand. 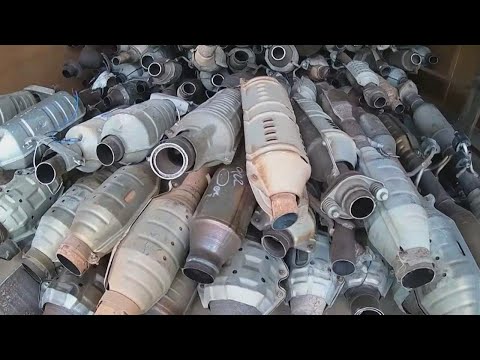