Home > News > Auto Guide
15 Apr 2010, 08:14 UTC ·
by Alexandru Radu Chis
The idea of a rotary engine has intrigued engineers and inventors since the beginning of the internal combustion engine’s inception. Sparked by another industrial revolution, the need for efficient and feasible technological inventions brought the internal combustion engine into the 1900’s spotlight. However, due to the rotary combustion engine’s working principles, few engineers could overcome its challenges and in the end only one car manufacturer managed to achieve volume production. This article will focus mainly on that car maker and its successful Wankel engine design. A Short History of the Rotary Engine:
Well, in the beginning the first engineering approach was obtaining an engine architecture different than the one of the reciprocating internal combustion engine. And the first one to built and patent such an engine was Felix Millet in 1888. Millet created a 5-cylinder rotary engine built into the spokes of a bicycle’s rear wheel. His power unit design was later put into production by Darracq in 1900.

The early types of rotary engines had an odd number of cylinders displaced in a radial layout (usually 7 or 9 cylinders as this odd configuration resulted in smoother running thanks to its piston firing sequence). Starting from this design, at first the engine had a fixed cylinder block which directly rotated the crankshaft placed in the center and was called a radial engine. Now with a propeller fixed to the spinning crankshaft, the radial engine witnessed broad implementation in the aircraft industry.

However, this radial engine design raised a cooling problem, especially when operating stationary, as the cylinder block didn’t receive sufficient air flow. The solution for this cooling problem came in the form of reversing the role of the rotating piece from the ensemble, meaning the crankshaft was now bolted to the chassis and the propeller spun with the whole cylinder block. And this gave birth to the rotary engine. The upside to this was the fact that the engine’s cooling was improved, but the downside was that the aircraft became unstable and harder to control.

By the early 1920s, the rotary engine (which saw application mostly in the aircraft industry) became outdated and interest for continuing development of this type of engine plummeted. But all was not lost for the rotary engine as German engineer Felix Wankel invented a rotating design in 1957 that used a triangular shaped rotor spinning inside an oval-like housing. Because the design doesn’t use pistons like a reciprocating unit, Wankel’s rotary combustion engine is regarded as a type of pistonless rotary engine. Research about rotary engine designs really took off in the 1960s, but only Japanese car maker Mazda managed to successfully modify it and integrate it into the brand’s identity, being the only car maker able to reach mass production.So How Does It Work 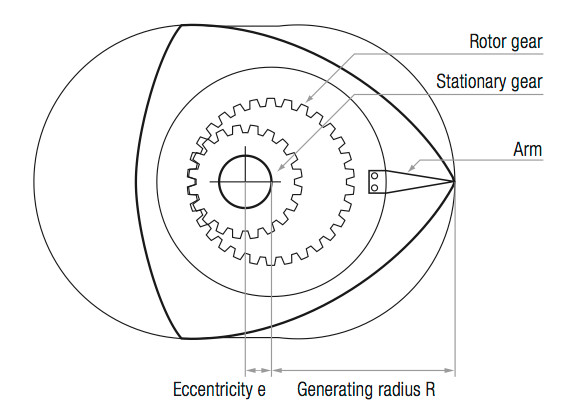 Wankel’s rotary engine is an internal combustion engine which uses the same principle of converting pressure into rotating motion, but without the vibrations and mechanical stress at high rotational speeds of the piston engine. Dr. Felix Wankel and his colleagues obtained the engine’s housing design by completing the following steps: they first fixed an outer-toothed gear on a white sheet and interlocked it with a larger inner-toothed gear; with the ration between the two gears being 2:3. Next, they attached an arm with a pen on the outside of the larger inner-toothed gear. When turning the inner-toothed gear on the small gear, the pen generated a cocoon-shaped trochoid curve.

The Wankel engine works in the same 4-stroke cycle as the reciprocating piston engine, with the central rotor successively executing the four processes of intake, compression, ignition (combustion) and exhaust inside the trochoid chamber. So, although both types of engines rely on the expansion pressure created by the combustion of the fuel-air mixture, the difference between them derives from the way they harness it to 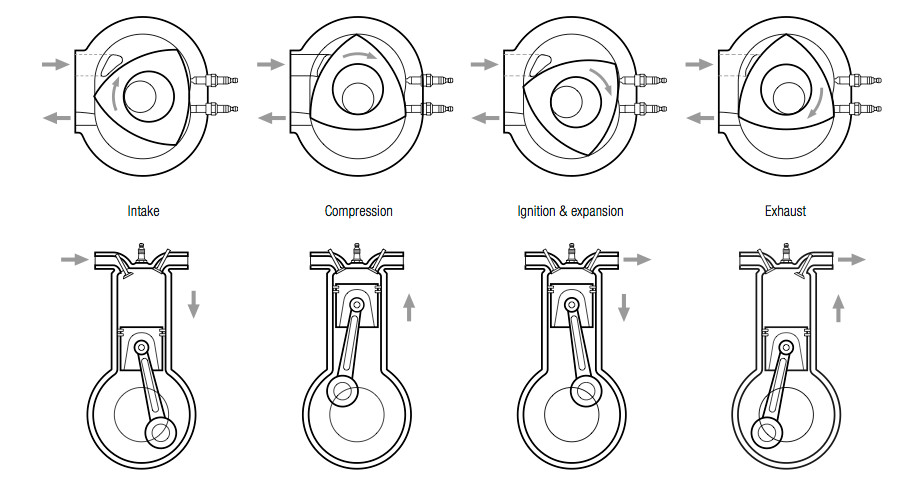 transform it into mechanical force. In a rotary combustion engine, this expansion pressure is applied to the flank of the rotor. Because of the rotor’s triangular shape, the inside space of the housing will always be divided in three working chambers. This is fundamentally different from the piston engine, where the four processes take place within each cylinder.

Wankel’s original design had an outer-toothed gear with 20 teeth, while the larger inner-toothed gear had 30 teeth. Due to this gear ratio, the rate of turning speed between the rotor and the shaft is defined as 1:3. This means that while the smaller gear does a single revolution, the larger inner-toothed gear rotates three times. Because the eccentric shaft, which is analogous to a crankshaft in a piston engine, is connected to the smaller toothed-gear it means that with the engine running at 3,000 rpm, the rotor will run at only 1,000 rpm. This not only means the rotary combustion engine runs smoother, but it also allows achieving a higher redline.

We recommend you take a closer look at the diagrams and Matt Rittman's 3D animation video at the end of the guide to better visualize and understand the Wankel engine’s operating mode. The Pros and Cons of the Wankel Engine
The first things in favor of the Wankel engine are its small size and lightweight construction. This can prove crucial when designing a lightweight car with high power output and small engine displacement. It also allows for improved collision safety designs, more working space for aerodynamics or stowage compartments and better weight distribution.

The second favorable trait of the rotary combustion engine is its flat torque curve characteristics throughout the whole speed range. Research results showed that using a two-rotor configuration, torque fluctuation during operation were at the same level with an inline 6-cylinder reciprocating engine, while a three-rotor layout proved smoother than a V8 piston engine.

Other advantages of the rotary combustion engine are its simple structure, reliability and durability. Because there are no pistons, no rods, no valve actuation mechanism, no timing belt and no rocker arm the engine is easier to built and requires far fewer parts. Also, because it lacks these components the Wankel engine is more reliable and durable under high-load operations. And remember, when the rotor engine runs at speeds of 8,000 rpm, the rotor (which is the large part of the ensemble) is turning at only one-third that rate.

Disadvantages of the Wankel engine include imperfect sealing against the chamber ends, which counts for leakage between adjacent chambers, and unburned fuel mixture. The rotary combustion engine also has a 50% longer stroke duration compared to a piston engine. The engine’s operation also allows for more carbon monoxide and unburned hydrocarbons in the exhaust stream, making it an obvious pariah among tree-huggers.

The biggest disadvantage, however, is its considerable fuel consumption. Comparison tests showed that a Mazda RX8 used up more fuel than a heavier V8 engine with over four times the engine displacement, but comparable performance figures. Another downside is the the fact that small amounts of oil end up in the working chamber and as a result owners must periodically add oil, increasing the running costs.Mazda’s Contribution to Wankel’s Engine

Mazda introduced the world’s first twin-rotor rotary engine car in May 1967 with the Cosmo Sport/Mazda 110S model. It featured a 491cc x 2 Wankel engine that developed 110 hp at 7,000 rpm. In 1970 Mazda introduced the first automatic transmission on a Wankel-powered engine and three years later the world’s first pick-up truck with a rotary engine.

After implementing the six-port induction system for greater fuel economy and power, Mazda continued developing the rotary combustion engine in order to achieve low emissions. The six-port induction system featured three intake ports per rotor chamber and could achieve improved fuel consumption by controlling them in three stages. Another noteworthy development was the implementation of a two-stage monolithic catalyst.

The next era in Mazda’s evolution of the Wankel engine was marked by the introduction of the turbochargers. In 1982 the Cosmo RE Turbo went on sale as the world’s first rotary engine car equipped with a turbocharger. Building on that achievement, Mazda would later adopt the twin-scroll turbo, minimizing the engine’s turbo lag.

However, the key innovation from Mazda came with its presentation of the RENESIS engine, which stands for the GENESIS of the RE (Rotary Engine). RENESIS is a 654cc x 2 engine that generates 250 hp at 8,500 rpm and 216 Nm of torque at 5,500 rpm. Besides its smooth engine operation and crisp response, the RENESIS engine achieves vast improvements in terms of fuel efficiency and exhaust gas emissions. Mazda’s RENESIS won the International Engine of the Year and Best New Engine awards in 2003. Inspired by its international success with the RENESIS, Mazda presented a new Wankel engine capable of running on both hydrogen or petrol. However, this hydrogen RE engine didn’t manage to raise as much interest as the petrol powered one, possibly down to the lack of hydrogen-based infrastructure at the time. On May 2007, the Japanese car manufacturer Mazda, celebrated 40 years of developing work on the Wankel engine.

The next-generation RENESIS rotary combustion engine is already in development and made appearance with Mazda’s Taiki concept car. The next-gen engine promises a larger displacement of 1600cc (800cc x 2) which is expected to raise torque at all engine speeds and to increase thermal efficiency. But despite progress made in terms of exhaust gas emissions, power output and working chamber sealing, the Wankel engine will still struggle with oil and fuel consumption due to its specific functioning design.