1 This 2001 Mazda RX-7 Is a God Tier Rotary Legend, Provides a Deafening Drive

The inline configuration is arguably the most common automotive engine design for plenty of reasons, including simplicity and the low cost of producing these motors. We also have plants with the cylinder banks arranged in a V, flat mills, boxers, and oddballs such as the VR and W.
5 photos

The oddity to rule them all, however, is the pistonless rotary engine that converts pressure into rotating motion. More compact and lighter than conventional powerplants, this motor came to prominence after a gentleman by the name of Felix Wankel started to develop it for German company NSU Motorenwerke AG. Fellow engineer Hanns Dieter Paschke improved the design for mass production, attracting the interest of many automakers.

NSU rolled out the Spider in 1964, but Mazda kept developing the rotary engine for 45 years. The love story that started in 1967 with the Cosmo Sport came to a temporary end in 2012 when the final RX-8 rolled off the line in Hiroshima, but Mazda still believes in the good ol’ Wankel motor. Lest we forget, the 2023 model year MX-30 will be available with a range-extended powertrain option that incorporates the SkyActiv-R rotary engine.

There are, however, other companies that also believe in this unconventional design. LiquidPiston is one of them, and the biggest difference over Mazda’s rotary is the high-efficiency hybrid cycle of their X-Engine. This particular thermodynamic cycle combines elements from the Otto, Diesel, Atkinson, and Rankine cycles, which makes it quite an interesting piece of engineering.

Warped Perception has the opportunity of testing the LiquidPiston X-Engine with a transparent cover and a high-speed camera, revealing what happens inside of the HEHC engine. Be it propane gas, acetylene, or car-grade gasoline, this potentially game-changing motor doesn’t skip a beat.

With only two moving parts (the rotor and shaft), no poppet valves as featured in other four-stroke engines, multi-fuel capability, and minimal NVH characteristics, the non-Wankel rotary developed by LiquidPiston has a lot going for it. Even though the MIT startup focuses on the military and aerospace segments, the automotive market is on their radar as well. 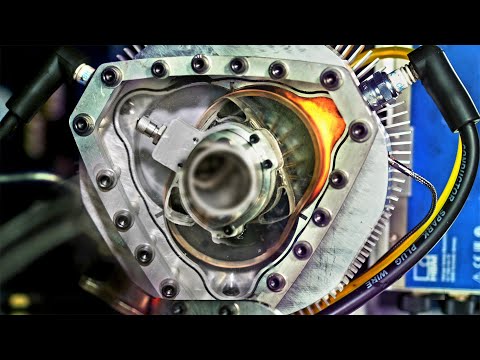