3 Mercedes-Benz Gets Too Excited About “Back to the Future Day,” Messes Up the Date

5 Back To The Future Time Machine Restoration Makes Us Want to Watch the Trilogy Again
Car video reviews:
Up Next

Forget About the Evoque Cabriolet, Here’s Its Grandfather and It’s on Sale

Do you realize a science fiction movie turned a bankrupt carmaker into a legend of the past? After all, DMC was around only for that much. It did manage to make about 9,000 DMC-12s before production halted in early 1983. Bottom line, today is the moment some of us have been waiting for 30 years, and perhaps there should be a proper way to celebrate it.
Furious 7 is the seventh installment in a franchise that started out as an experiment. They’re planning to make at least another two movies, even though this one alone has almost reached the $2 billion mark in worldwide box office.

We think all good things come to an end, and it’s probably for the best. After all, how can you miss something and smile every time you're reminded of it if it keeps coming back? Perhaps this is one of the reasons the Back To The Future trilogy still triggers my interest, it still makes me smile. Or maybe the idea that you could go back in time never gets old, since we all know this is a second chance nobody deserves. Is it the Mirai?
Toyota is using this moment to promote the launch of its hydrogen-fuel-cell-powered Mirai in the U.S., which almost makes sense considering it’s the closest thing we have to using trash to power a time machine on wheels that flies. But it still doesn’t sound like the right choice for me.

You know what, why don’t you go on and drink water from that exhaust pipe, I like my dream 1969 Ford Mustang just fine. Heck, it’s not like I’m asking you to stop flying those Boeing 747 airlines all day long (and don’t get me started about the huge trucks, trains and ships transporting goods and so on).Is it Lexus' hoverboard?
Then, there’s Lexus and its hoverboard. So far so good, but we still have to find a magnetic track we can carry around since the thing won’t hover otherwise. At least Lexus created something close to McFly’s futuristic (and pink) board.

So what, then? Well, what about making something by yourself for a change? After all, didn’t Doc Brown create his Time Machine all by himself?

Thanks to the fine folks over at the Instructables community, I have found a couple of ideas you could actually use. I’ll list a short description of the ones we find most appealing.

Traveling through time may be something we’d all like to do, but at the end of the day, the future should be about children. The first contraption on my list is a $25 Step2 push car a loving mother bought for her one-year-old son. “I spent a few weekends and nights in October recreating the iconic DeLorean with cardboard, tape, paint, and a little help with some EL lighting from my husband, Jeremy.“

We’re not leaving the land of paper just yet. It may be a vulnerable material, but it's also easy to shape, design and color in just the right way. The set is made of two DeLorean Time Machine vehicles, with one being 2.6 ft (80 cm) long while the other is a little smaller at 1.7 ft (50 cm). The Back To The Future enthusiast who made them owns the print shop and it’s there where he printed it, on premium matte finish cardstock paper using high-end digital printers.

Every hero has his villain, and every pink hoverboard has its Pit Bull counter-act. We figured you might be a little sick of McFly’s “commuter,” so we found this thing instead. Unlike most other hoverboards that had to be pushed with one foot on or near the ground, its two directable rockets provided enough power for travel over water. Its other distinctive features were the three cables that allowed additional hoverboards to be towed behind. We’ll let you guys decide if the replica this Instructables member created is accurate or not. 4. Back To The Future Skin Pull Effect
Since we are getting quite close to Halloween, we figured taking an easy way around that party you have to attend would come in handy. To recreate the skin pull effect found in Back To The Future, you only need a paintbrush and some liquid latex, apparently.

No matter how badly this may sound, considering none of us can imagine Marty McFly driving anything other than Doc Brown’s DeLorean Time Machine, you should know it’s actually a funny story. Here it is:

“For Halloween, my son wanted to do a Back to the Future (BTTF) Theme this year. He wanted me to get a real BTTF DMC reproduction for $60,000 on eBay. After I had got off the floor from passing out, we came up with a more affordable way to do this. Why not make one out of my Scion TC. So we did. It probably cost about $100 bucks to do this. We have the Flux Capacitor, an iPad time calculator and the Plutonium case that doubles as our candy dish.”

The real question here is, can you guess what the world will look like 30 years from now? 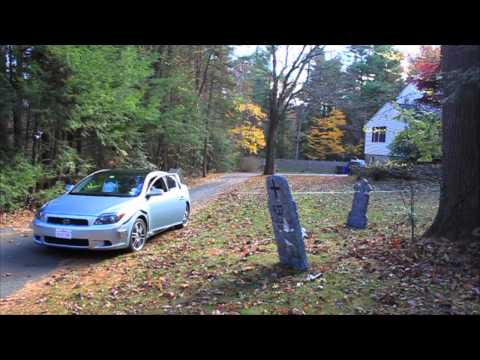