5 Carlos Ghosn Showers Elon Musk and Tesla With Praise, But Not His Former Company
Up Next

Home > News > U-turn
Elena Gorgan
Whether it's because they’re electric or made by the most unconventional and polarizing carmaker of the moment, when Teslas fail, they make headlines around the world. This is no exception.
3 photos

For the second time in as many months, a Tesla lost its roof while traveling down the highway. The first time it happened, it was a Model Y that had just left a service center, and the issue was acknowledged as a manufacturing problem that affected a small batch of vehicles.

This time around, it’s a Model S losing its top in the most unglorious and potentially dangerous manner. It happened in China on November 22, and a video of the incident was posted to Weibo by user Car01. From there, it ended up on reddit, on one of the Tesla forums, and spread elsewhere as well.

The user who originally shared the video said that it had been given to him by someone else, likely the couple in the vehicle with the dashcam recording the whole thing. The upside is that no one was hurt: the glass roof didn’t land on anything or hit other cars and didn’t cause an accident. The driver of the Model S was also uninjured.

Four hours after the video was posted, Tesla offered an explanation for what happened.

“We have contacted the owner of the car as soon as possible and are helping the owner solve the problem as soon as possible,” a translation of Tesla China's response reads. “After preliminary investigations, the vehicle had undergone roof glass replacement at a third-party authorized repair center. We are currently investigating the cause of the incident.”

The fact that this was an authorized shop means that Tesla can still be held responsible for what happened, though that’s largely dependent on the outcome of the ongoing internal investigation.

As with everything related to the EV maker, this viral video is again polarizing car enthusiasts. On the one hand, there are the Tesla supporters who say stuff like this is way more common with ICE (internal combustion engine) cars, so what’s the fuss all about. On the other hand, there are commenters pointing out that quality control still leaves a lot to be desired, despite Tesla’s many great accomplishments (too many to count). 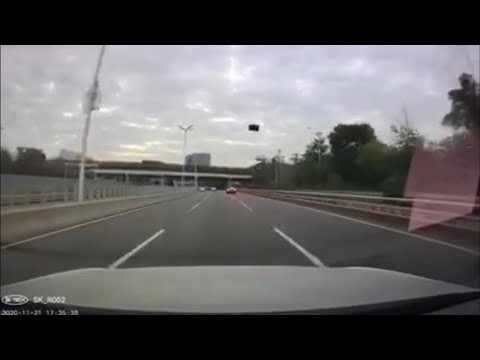