4 Alternative Fueled Cars Sold Like Hotcakes in Europe in 2018

Volkswagen is only a few months away from revealing the all-new Golf 8 hatchback. But in the meantime, this Mk7 is holding down the fort as best it can. This comparison review shows how the new Ford Focus and Kia Ceed do some things a little better.
3 photos

We're big fans of the Ceed. Not only is it affordable, but it also looks decent in base spec, unlike most German cars. At the same time, standard equipment is ample and you don't get that economy car feel, like in the Skoda Rapid.

Obviously, Kia's way has always been quantity over quality, so the Ceed is slightly less refined in the way it drives, which is not to say you shouldn't consider buying one. But there are cars that focus the experience behind the wheel like the... Focus. Get it? We're going to automotive journalist hell for that joke.

This all-new generation is still as sharp as the old one but does many things better, like quality and especially trunk and rear seat space. Carwow's review shows Mat Watson struggling with the parcel shelf. But we think that's nitpicking.

The engines aren't a big decider either. All three test cars have been fitted with 1-liter turbocharged units. VW's is vanilla, Kia's vibrates a little while Ford offers the most power and refinement. The Focus is also the best at cruising in comfort. That, combined with the styling is what earns it the victory.

But we'd argue that in this dark silver color, it's not particularly interesting. The boxy, 6-year-old Golf was never a looker. Our design vote would go towards the new Ceed. It's just a shame the Korean company doesn't have some wow technology, like Virtual Cockpit or SYNC 3.

Oh, and in case you buy your cars based on the nationality of the brands, we want to argue that all three models are German in some way. It's obvious why for the Golf, but the Focus is made and tested around Cologne while Kia's test center is near Frankfurt. 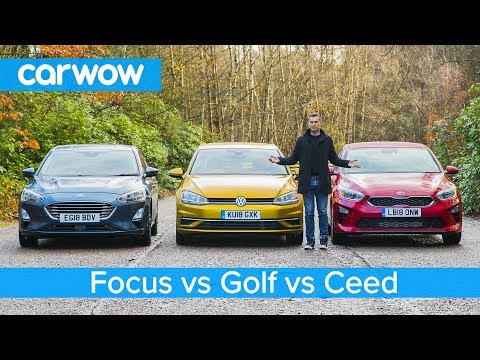