1 Congressman Proposes Taxes for Billionaires Who Fly to Space

4 Ashton Kutcher Bought a Ticket to Fly to Space With Virgin, Backed Out

Forgotten Jaguar XFR-S Reveals What It's Made Of, Hits 193 MPH in Autobahn Sweep

Get Married in Space, on Board the Neptune One Space Balloon

Home > News > Space Junk
Elena Gorgan
Forget about riding to the wedding chapel in a fancy limousine, eloping without telling anyone, or putting together the most outrageous wedding party money can buy. The best way to outdo every other couple out there getting married is to get hitched in space.
7 photos

And it’s a possibility, too. Space tourism is inching closer to reality, with the recent pioneering flights (and controversial launches) of Virgin Galactic (Sir Richard Branson) and Blue Origin (Jeff Bezos) proving the point. Space Perspective, a lesser-known space company, is hoping to bank on the new trend, and to offer space weddings.

Space Perspective has a different approach to space tourism than either of the gentlemen mentioned above or, for that matter, Elon Musk and his SpaceX. They’re offering a more leisurely take on space travel, on board a pilot-operated space balloon called Neptune One, which will make the journey to the edge of space and back again in six hours, give or take some minutes.

The company is founded by Taber MacCallum and Jane Poynter, who, back in 2014, under the moniker StratEx, launched computer scientist Alan Eustace into space with a balloon, just so he could break the record for the highest altitude free-fall jump (136,000 feet / 26 miles / or 42 km). The Neptune One was introduced in June 2020, with the first unmanned test of a scale model taking place successfully precisely one year later.

In a recent interview with The Observer, Poynter says that all spots are booked solid for 2024 launches, an impressive feat of its own. A single seat costs $125,000, with a $1,000 refundable deposit, and at 350 planned launches for 2024, that translates to $43.7 million in future revenue.

The demand is high, she says. People who always wanted to go to space were the first to reach out, but as word spread, they started to receive even more unusual requests. “We’ve got customers who’ve bought up entire capsules for group events,” she says. “Some even want to do weddings in our space balloon.”

The bottom line is that, if you want to get married at the edge of space, you (probably) can. Just not in 2024. Bookings are open for the following year, though.

Neptune One takes a little over two hours to get to the desired altitude, and the plan is to spend two more hours once up there, before beginning the descent and making a controlled splash in the ocean. The eight guests on board will be served breakfast on board the capsule, which boasts plush reclining seats, a toilet, a bar and WiFi. That last one is very important, because the hottest selling point of this space balloon is that it will offer the ultimate Insta-ready backdrop. 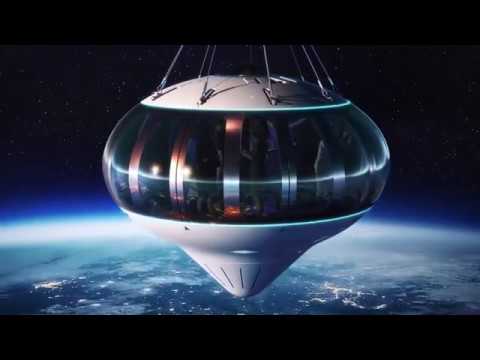