Home > News > Videogames
3 Feb 2022, 21:59 UTC ·
by Cosmin Vasile
We’re a month away from one of the biggest releases of the year aimed at racing fans, Gran Turismo 7 and PlayStation, together with developer Polyphony Digital continue to hype up the game. Not that we didn’t get enough information about the next entry in the Gran Turismo series, but for a fan of the franchise, there can never be enough footage to watch until the game drops next month.
7 photos

That being said, the most recent State of Play showcase was all about Gran Turismo 7, which means at least 30 minutes of gameplay and information about the game. From what we’re seeing in the video, it’s pretty clear that developer Polyphony Digital has done everything it could to make the cars look greater than ever before.

First off, Gran Turismo 7 clearly features the best visuals and physics in the series’ history. At launch, the game will include over 400 cars from over 50 brands, along with 34 real-world tracks and fantasy circuits from previous Gran Turismo games. More cars and tracks will be added after the release via an update, Polyphony Digital confirmed.

New for the Gran Turismo series is the Café, a place where drivers get to chill and learn about the history of iconic cars and the automotive industry in general via audio interviews with car designers. This is also the place where you can take missions like adding a number of cars from the same manufacturer.

When it comes to physics and weather, everything has been improved from the previous games to make Gran Turismo 7 the ultimate racing simulator experience. For example, the weather can change dynamically during a race, and so will the way the cars respond to commands.

Although the PlayStation 4 is not mentioned in the video, we do get a lot of information regarding PlayStation 5 gameplay. For example, PS5 players will be able to choose between Frame Rate and Ray Tracing modes. The former is supposed to offer better performance, while the latter should boost the graphics quality.

One other interesting aspect is that Gran Turismo 7 will feature a two-player split-screen mode so that you can play on the couch with your friends and family.

If you didn’t know already, Gran Turismo 7 is already available for pre-order at the PlayStation Store for either PS4 or PS5. It’s also important to note that 25th Anniversary Edition includes the PS5 version and comes with the digital code for the PS4 version. Gran Turismo 7 is scheduled for release on March 4. 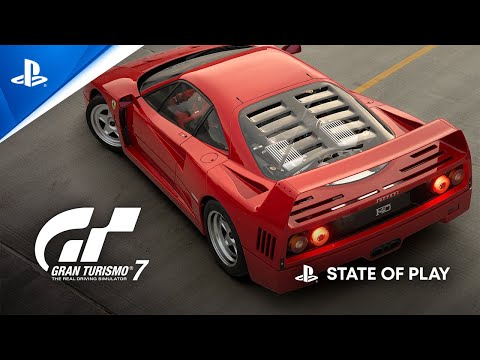