2 Vanlife Sucks at Current Gas Prices, So This Vanlifer Is Moving Into a Tesla

4 Errol Musk Says He’s Not Proud of Elon, Doesn’t Own a Tesla

5 For All You Yacht-Hoppers, Kim Kardashian Has a Pair of Gloves to Elevate Your Swim Look
Coverstory

Freya, the Walrus Sinker of Boats, Has Been Euthanized

Elena Gorgan
In an unexpected development, Norwegian authorities have decided to, and actually went through with euthanizing Freya, a female walrus that had spent the summer in Oslo Fjord. Freya became a viral star last summer when she wandered from the Arctic circle into highly populated areas.
8 photos

It’s not uncommon for walruses to migrate over the summer toward coastal territories to feed, but Freya was different because she showed no signs of fear whenever she came across people. Her case was particular for that very reason, and it ended up turning her into an online celebrity.

Last summer, Freya made appearances in Denmark, Germany, Scotland, and the Netherlands, lounging on boats, yachts, and military submarines. She chose to spend this summer in Norway, where her behavior did not go unnoticed, mostly because she would often climb on small boats and inflatables to sunbathe and sink them in the process. As the number of damaged boats rose, so did Freya’s fame, and in almost no time, she was drawing crowds both on land and on the water wherever she chose to stop for her daily sunny naps.

It’s this kind of celebrity that eventually sealed her fate. On Sunday, August 14, Frank Bakke-Jensen, Director General at the Norwegian Directorate of Fisheries, announced that Freya had been put down. The decision had not been taken lightly, he said: the Directorate had previously considered the option of relocating Freya with help from the Norwegian Institute of Marine Research. That option did not prove viable.

Previously, authorities had built a floating dock for Freya, hoping that she’d choose it over people’s boats and that they’d be able to move her with it once she became accustomed to it. Freya didn’t care for the dock, and the attention she was getting posed a danger both to herself and the people around her. Bakke-Jensen says that people kept gathering to watch her, despite previous warnings from the authorities.

“We have sympathies for the fact that the decision can cause reactions with the public, but I am firm that this was the right call,” Bakke-Jensen says in a press release. “We have great regard for animal welfare, but human life and safety must take precedence.”

Rune Aae, researcher and doctoral fellow in science education at the University of South-eastern Norway, who had warned that Freya’s popularity was stressing her out, called her death a rushed, ill-advised decision and a “shame.” Had Freya been left to her own devices, she would have left the waters of Oslo Fjord soon. Drawing crowds would have stopped being a problem in a matter of days because summer is almost over in Norway, and school is about to start.

“Norway is the country that killed Freya after being around for over two years around the entire North Sea,” Aae writes on social media. “This is just sad!” 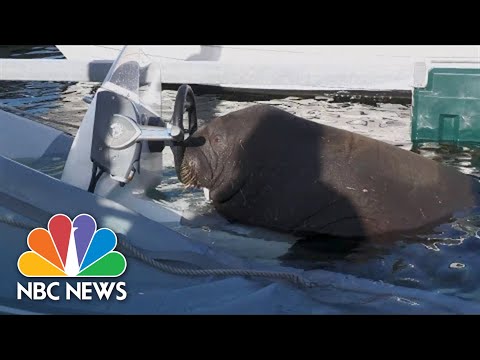 SUBMARINE SLEEP: A famous Dutch walrus named Freya hopped on board a Royal Netherlands Navy submarine to take a nap on Wednesday morning. Freya has been in the area for two months now, local news says. pic.twitter.com/vxi3KBSMOh


Big story in Norway this summer is a walrus we've named Freya has made it to our shores and is touring the country, laying around and sinking boats pic.twitter.com/rQolsxd88b


Freya is not sinking boats, she is reclaiming her time, and territory. She is big, and she is beautiful, and your pleasure boat engines melted her polar ice, so fair exchange.