1 Permanent Cabin 2 Is a Minimalist, Sustainable, and Perfect Summer Retreat

2 Elon Musk Lives in a Prefab Tiny Home That He Doesn’t Even Own, a Boxabl Casita

3 Haus.Me, the Vacation Home for Perfectionists, Is Sustainable, Smart and Fancy

5 POD-Idlala Tiny Home Is Probably the Tiniest Tiny Ever, Still Comfortable
Car video reviews:
Up Next

Toyota to Make More Spare Parts for the Supra A70, A80, Grab Them While You Can

Packing your entire home for the summer vacation doesn’t seem compatible with the idea of saving human lives unless your summer vacation involves plans of volunteering in disaster areas. This time, it’s the house itself that’s the hero.

Folding Pod is a concept for a folding, prefabricated home. Designed by New York-based Hariri & Hariri Architects and formally introduced in 2018, the concept has evolved into an all-encompassing housing solution. So, where does it fit in your summer 2021 vacation plans?

We’ve covered at length several mobile homes; prefab homes represent a small but impressive niche of this market, one with incredible versatility and potential. Unlike proper tiny homes, the prefab units can’t be moved around at will, but they can still be moved with some ease if the situation requires it. They’re easy to transport on-site and just as easy to set up, with some makers even promising new owners they can move in within a day.

Prefab homes are also versatile and could present a solution to the deepening housing crisis. However, as the ladies behind Hariri & Hariri pointed out in 2018, when the Folding Pod project was introduced, it is an architect’s responsibility to design products that solve existing problems.

While it started out as one such project, Folding Pod has applications elsewhere, as well. With a design inspired by Origami, it could be the perfect “to go” vacation home: entrepreneurs big and small could invest in one or several such units and have them shipped and assembled to the desired location. It could be a mountain plateau or on the beach, and the new community would have minimal impact on the environment since setting up the pods would not require building on the land. Of course, other aspects would also have to be considered before declaring these communities or resorts sustainable, but at least as far as construction goes, the Pod would be very environmentally friendly.

Each unit is made of hinged 3D-printed Equitone panels and deploys easily, as one would unfold a piece of paper. Sustainable materials like glass and wood could be used, as well as recycled plastic and fabric. A basic unit would measure 32 feet in length, 16 feet in width, and 18 feet in height (9.7x4.8x5.4 meters), and could be used either as a single home or as a modular piece into a larger structure.

“The idea is to design modules of utility and beauty,” the architects say. “Easy to build, easy to transport, and easily affordable. The basic pod can be a refugee or disaster shelter, a wood or beach cabin, assembled into clusters for large music or sports events, and even into a single luxury home. It will be suitable, enjoyable and unique in each of its different conditions.”

Since each unit would be prefabricated, the price would be lower. Sold to private customers as vacation homes or retreats, they would be offered with upgraded finishes, ready to move in, at an extra charge. A chunk of this profit would then be redirected to build basic units for the homeless and disaster areas.

And this brings us to the “with a hero’s heart” part of the headline. The Folding Pod would also serve perfectly as shelter in disaster areas, whether we’re talking about floods, hurricanes, and fires, or human displacement in conflict zones. The architects believe that “home is a human right” and, as such, humanity as a whole has a duty to figure out the housing crisis caused by other crises.

In late 2020, Hariri & Hariri teamed up with their UK-based partner Richard Perkin to develop and build a half-scale concept model of the Folding Pod to further study and showcase its applicability in addressing issues of “environmental sustainability, income inequality and social dislocation.” The architects hope that the concept will catch the attention of other industry players, which will lead to the eventual deployment of these living units in the areas where they’re needed the most and, in the process, permanently replace the tents used today. 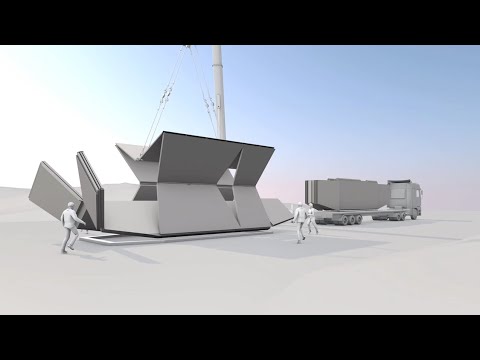 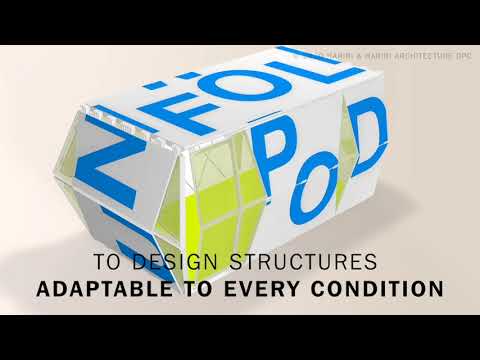