I Rode Shotgun in the New Hyundai Ioniq 5: It Changed My Attitude About EVs

Following the highly successful 488 GT3, the Prancing Horse of Maranello is looking forward to the 2023 racing season with extremely high expectations. The 296 GT3 is their weapon of choice, a V6-engined racecar that sounds even better than the road-going model. As opposed to the 296 GTB, the GT3 regulations prohibit any sort of hybridization.
10 photos

Pictured at the Fiorano test circuit, the 296 GT3 was developed in conjunction with Oreca. With factory drivers Alessandro Pier Guidi and Andrea Bertolini behind the wheel, the twin-turbocharged racecar doesn’t fail to impress in the twisties and from an aural standpoint. Of course, it also produces more downforce than the 296 GTB, which is capable of lapping the Italian circuit in one minute and 21 seconds if equipped with the Assetto Fiorano package.

Output figures aren’t public at the present moment, and the 296 GT3 will be subject to Balance of Performance as well. On the other hand, we do know that the 488 GT3 belts out roughly 600 ponies and 500 pound-feet (678 Nm) from its twin-turbo V8 shared with the 488 GTB. Ferrari didn’t develop the F8 Tributo into a racecar, instead preferring to refine the 488 GT3.

Internally referred to as the F163, the first-ever V6 developed by Ferrari for road-going applications delivers 654 horsepower at 8,000 revolutions per minute. Located between the force-fed engine and dual-clutch transmission, the electric motor cranks it up to 819 horsepower. Torque is estimated at 546 pound-feet (740 Nm), which is pretty darn impressive. Even more so if you remember that the dry weight estimate is 1,470 kilograms (3,241 pounds).

Praised for all the right reasons, the mid-engine berlinetta will soon be joined by a convertible sibling. We still don’t know if it’s going to be called 296 GTS or 296 Spider, but we do know that it will premiere next week. 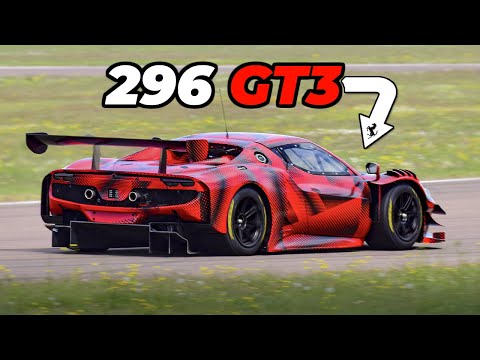