Home > News > Tuning
Vlad Mitrache
The GR Yaris is the hot Toyota of the moment, but no matter what model the Japanese manufacturer launches, it will never reach the same iconic status as a 2JZ-powered Supra from the '90s.
6 photos

To be fair, it's not like Toyota is spoiling us with performance-oriented models and we're too picky - perhaps more attempts would increase its chances of success. The carmaker even went for a nameplate revival with the 2019 Supra, but the fact it shared its platform with BMW's Z4 severely chipped its JDM flavor, giving it a strong hint of sausage instead.

That means we still have to rely on the old model if we want to see something truly special, and luckily the tuning community is always happy to oblige. There's no shortage of crazy-power Supras out there, with the 3.0-liter straight-six engine routinely going over the 1,000 horsepower milestone.

The one in this clip is 239 hp beyond the mark, which is neither too much nor too little. That is, of course, by 2JZ and Supra standards. The cool thing about this build - other than the fact it has a very specific 1,239 hp output - is that it doesn't really show it. Both the exterior and interior look pretty stock, though most people know what to expect from a fourth gen Supra, whether it wears a big wing and a wide body kit or not.

The fact it's missing one of its headlights should be a dead giveaway too that something unorthodox is going on under that hood. The only reason to do that is if the air coming through the vehicle's factory-given vent isn't enough. Whether to feed the engine or cool the radiators, the fact it needs more than that opening provides suggests the power on tap is a lot greater than the stock value.

But what do Supras do with all that power? Well, most of the time, they run quarter mile drag races in the eights, and sometimes even sevens. This one, on this occasion, is simply going to test its top speed on an unrestricted section of the Autobahn. Either its top speed or the nerve limit of its driver, we can't tell for sure, but what we do know is that you're invited for the ride. 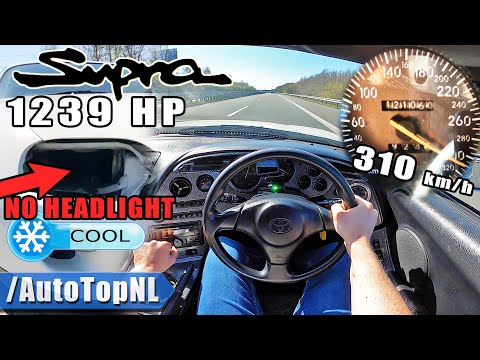