2 Shell Is Building One of the Largest Biofuel Plants, With CO2-Capturing Technology

Designed in the U.S and tested in a Walmart delivery vehicle all summer long, this revolutionary opposed piston 3-cylinder seems set to prolong the life of ICEs. However, you won’t be seeing it inside a mass-produced passenger car, as it’s meant to power 18-wheelers.
7 photos

In the era of mass electrification, we rarely hear about a completely new, large displacement engine being built. Even manufacturers of heavy-duty trucks are moving towards hybrid, battery-electric, or even hydrogen power. Nevertheless, one U.S. company decided against abandoning the ICE and instead chose to redesign it.

Introduced since the early 1880s, the opposed-piston (OP) engine is nothing new. In a nutshell, it typically use two pistons fitted at each end of a shared cylinder head, facing each other. These pistons, which are equipped with individual crankshafts and connecting rods, move towards one another and, as they get close to each other, fuel is delivered into the cylinder and combustion occurs.

There’s no cylinder head or valvetrain, which reduces heat and friction loss, ultimately leading to better range than the classic four-stroke Otto cycle units. Because of this, it became feasible for trains, airplanes, boats, or even tanks during the first half of the nineteenth century. However, the traditional four-stroke managed to overshadow it, so few manufacturers invested in proper research and development of OP the engine.

Headquartered in California, the state where EPA (Environmental Protection Agency) requirements are set to dramatically limit emissions starting with 2027, Achates Power is reviving the OP engine. The company was founded in 2004 by theoretical physicist Dr. James Lemke to prove that the OP this engine design is not only inherently more efficient but can also be far more environmentally friendly.

It all started in 2018 with a smaller, fully functioning prototype squeezed in a Ford F-150 that eventually morphed into a 10.6-liter three-cylinder. Created to replace conventional 13 and 15-liter four-stroke straight-six diesel engines in Class 8 trucks, it makes 450 hp at 1700 rpm and 1,750 lb-ft (2,372 Nm) of torque at 950 rpm. To maximize efficiency, it uses a supercharger and a turbocharger.

Inside, two crankshafts are fitted at the top and bottom of the engine, connected by a gear train for efficient timing and power transfer. During compression, the upper pistons move downward within each of the three vertical cylinders, while those at the bottom move upward. Then, during the power stroke, the pistons move apart until each exposes a set of ports in the cylinder walls. At the top, we find the intake ports, whereas the exhaust ports are placed at the bottom.

Using this design along with state-of-the-art materials and manufacturing methods, the engine is fairly compact, highly efficient, and produces far fewer emissions than conventional four-strokes.

For example, cold starts are notorious for generating high levels of harmful nitrogen oxides (NOx) because the selective catalytic reduction (SCR) system won’t kick in until it gets hot. In some engines, that happens quicker than in others, but there’s still a less than ideal operating window in which the SCR is asleep.

According to Achates, in its advanced powerplant, the flow of air is decreased exponentially during cold starts by slowing down the blower, so the SCR reaches the optimal temperature much quicker.

The engine also uses an efficient water-cooled exhaust gas recirculation (EGR) system that prevents a large portion of those harmful exhaust gasses from being released into the atmosphere. Its efficiency is boosted by a unique combustion system that features a pair of injectors mounted on each side of each cylinder. They spray fuel toward the center of the combustion chamber and not toward the cool metal walls of the cylinder. Because of this, the fuel remains surrounded by air rather than splashing on the walls and transforming into soot.

Overall, these innovations translate to 90% less NOx and 15% less CO2 than what the vast majority of typical 13-liter straight-sixes emit.

A test engine has been running since last July in a Peterbilt 579 and, this summer, Walmart has been using it daily with encouraging results. It's still under development, but we can expect it to go into production in the following years.

The company states that it’s also working on several opposed-piston applications for the automotive industry, so there’s a glimmer of hope for those of us who aren’t ready to say goodbye to the internal combustion engine. 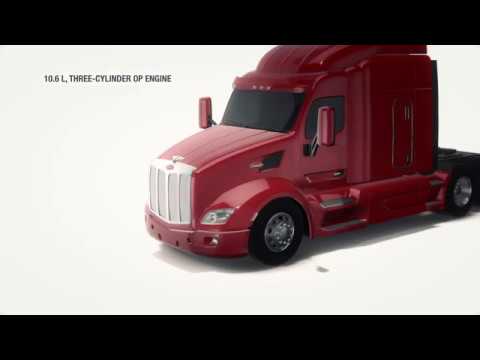