1 Dinan Is Selling Its Special BMW 1M Model, on Craigslist

5 BMW 1M Coupe Is Ready for Bimmerfest
Car video reviews:
Up Next

When BMW launched the 1M Coupe, it held back. It held back so that the new, crazy Coupe wouldn’t step on the soles of the M3 and make it look obsolete and old by comparison. The new blood had forced induction on its side and was slightly smaller.
1 photo
With perfect 50:50 weight distribution, a manual gearbox and plenty of torque to turn the rear tires into smoke in a matter of seconds, the 1M Coupe was absolutely crazy.

Perfectly balanced and priced just right, the car was, unfortunately, built in a limited production. Initially, only 2,000 units of it were scheduled but the reaction to it was so overwhelming and welcoming that the Bavarians decided to make 6,331 units in the end.

Therein lies an initial problem. Being so good and so rare (only 740 reached US soil), the Bimmer soon became a collectable. With prices rising alongside desirability, few people would actually look to tune it beyond it’s already impressive stats.

A golden rule says that if you want to sell your collectible car in a couple of years, for more money than what you paid for it, you should keep it as stock as possible.

And why change it, after all. It has 340 HP and up to 500 Nm (369 lb-ft) of torque, it’s rear-wheel-drive, it has a LSD and a manual gearbox and you can use it every day. It seems perfect and true to the old BMW recipe for success.

The only reason you’d take it further would be to rival the E92 M3. And that’s exactly what Steve Dinan did with his S3R 1M Coupe. He took the 3-liter biturbo engine up to 450 HP and 450 lb-ft (610 Nm) of torque and then set it loose on a moderately upgraded chassis.

The Dinan car has new brakes, a new intake, new exhaust, new intercooler and oil cooler and a couple more parts to keep up with the extra power. However, it’s not a collectible anymore.

Sure, it was done by Dinan Engineering and it is absolutely perfect from a technical point of view but it’s not stock, as BMW made it and, in the eye of a collector, it’s not going to be worth the money.

As Matt brilliantly puts it: it may have a 4-year, 50,000 mile warranty but it’s just not the same. So, who is it for, then? It’s for those people that can appreciate how it drives and handles, up to a limit.

You see, with such amounts of power going to the rear wheels, it’s really hard to stay alive in this car after a point. Let’s see what the guys from the Smoking Tire had to say about it. 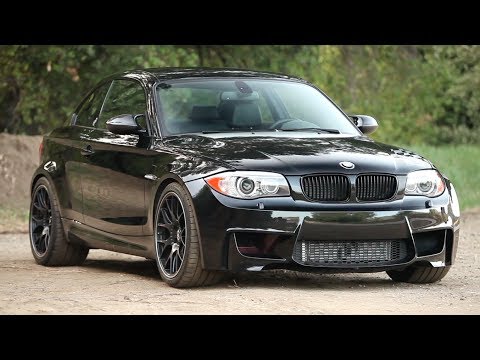