1 The Teton Is a Lovely Tiny Home on Wheels, Fit for a Family of Four

The creativity sparked by this unprecedented wave of unconventional living seems to have no limits. Whether they’re floating or riding on wheels, some of today’s mobile homes are ingenious conversions with unexpected origins, like this former railroad trailer.
8 photos

From $350 to $9,000 – this is what it took for Hannah Doss in California to go from paying rent to living in her own magical tiny house. Like so many others, she was tired of having to throw away money for a living situation that wasn’t pleasing her, The Sun reports. Her solution could truly inspire many, as it didn’t require a big investment or knowing how to build a tiny home from scratch.

At first, Hannah paid only $350 for a dirty-looking railroad trailer from 1985. The hard part was that it needed to be completely transformed, but it was eventually completed in just three months, with costs adding up to $9,000.

Yes, there’s not a lot of space in a trailer that’s only 8-foot-wide (2.4 meters) but it’s better than sharing a rental with other people, according to the young owner. There seems to be enough room for Hannah, her boyfriend, and their dog.

The conventional bedroom is replaced by a bed that needs to slide under the floor in order to not take up too much space, but the kitchen is equipped with everything it needs, including extra counter space, and the bathroom boasts a washer and dryer.

The owner saved more money by opting for second-hand items, such as the fridge and the kitchen cabinets. It also helps that she works for California State Parks, which allows her to pay only $39 monthly for the parking space, plus giving her access to electricity.

But what’s unique about this unusual tiny house is its fairytale-like style. Hannah used her creative skills to not only paint a beautiful picture on the former trailer’s exterior, but also make the interior as cozy as possible. It’s no wonder that Journey the tiny house even became the subject of Hannah’s series of children’s books.

You can find out more about this whimsical tiny house from the Tiny House Giant Journey video tour below. 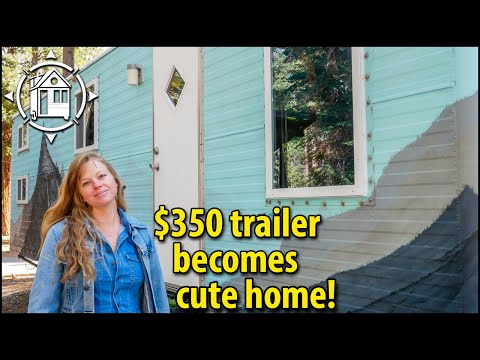