Cristian Gnaticov
At some point, most of us (okay, probably all of us) have wondered whether we can beat a police cruiser in a straight line acceleration, yet the answer is obvious. It depends on the type of car that we’re driving, what engine it has, how it puts down the power and how skillful we are behind the wheel.
6 photos

These questions were recently answered in a legal manner, as a police cruiser lineup up at the start line at the Bandimere Speedway in Colorado, near Denver, part of a campaign that “provides a positive alternative to illegal street racing”. The Colorado State Patrol vehicle was challenged (pun intended) by two Detroit muscle cars: the Challenger SRT Hellcat and its more potent sibling, the Challenger SRT Hellcat Redeye, which were looking to show what they're made of.

When the lights turned green, the drivers, one of who wore a uniform and used the emergency lights and siren to intimidate his rival – and it worked, as you’re about to see (guess old habits die hard) – pushed down the throttle and held on to the wheel. A quarter mile later, one of them went across the finish line, a couple of seconds quicker than the other one.

No records were broken on that day, which was all about pure driving fun and letting it all out in a legal environment, next to a ride that sends shivers down the spines of illegal street racers. Now, care to place a little bet? 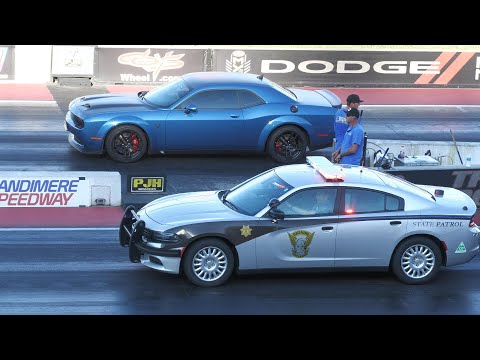