2 No More Double Cash from Chrysler 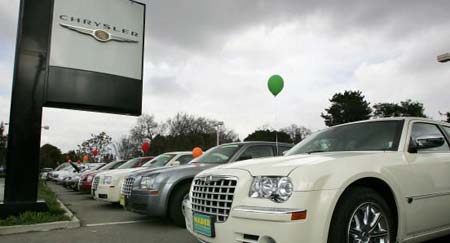 How else could it be since together with General Motors and Ford it accounted for 47 percent of all CARS sales? Chrysler posted a 30 percent sales increase in July compared to the previous month, with no less than five vehicles posting new month sales records in this July.

And to be more specific, Chrysler delivered a total of 88,900 units, a decrease of 9 points versus the same period of the previous year.

"The government's program is doing what it is designed to do-spur consumers to trade in older gas guzzlers for new, fuel-efficient vehicles," said Peter Fong, President and Chief Executive Officer-Chrysler Brand and Lead Executive for the Sales Organization, Chrysler Group LLC. "While we don't expect the industry sales forecast to change dramatically, we are seeing encouraging signs that consumer confidence is building, and more consumers are considering purchasing a new vehicle."

"The new-vehicle sales market got a shot in the arm the last week of July," said Steven Beahm, Vice President-Sales Organization, Chrysler Group LLC. "As a result of customers visiting their local Chrysler, Jeep or Dodge dealer, largely based on the news of the CARS program, retail sales of Chrysler Group small cars were up 52 percent compared with July 2008 and 106 percent versus June 2009."

Here are the most important figures posted by Chrysler following this successful sales month: