In 1993 Chrysler introduced the last generation of the New Yorker, a model that traced its past since 1938, sometimes not even knowing exactly in which segment it belonged.

Built on the same platform as the Eagle Vision and Dodge Intrepid, the New Yorker tried to provide a more luxurious experience for its customers. It even looked classier, with its less raked-forward C-pillars and the features offered on the inside. And yet, Chrysler decided to pull the plug on the nameplate just a few years later and close a chapter that lasted for more than half of a century.

Chrysler marketed the New Yorker as a luxury sedan and tried to give it a look that it deserved to be in that segment. Thus, the front featured a slim chromed grille flanked by similarly low-height headlights. All these elements were surrounded by a chromed trim, and even the bumper received some shiny accents. From its profile, the New Yorker revealed a cab-forward design with a similar-looking raked windshield as its Eagle and Dodge siblings, but the C-pillar was less raked and more rounded and vertical.

Inside, Chrysler tried to offer a luxurious experience and installed wide seats at the front and a bench profiled for two in the back, depending on the options. Moreover, a six-seat version was available. The list of standard features comprised a tilt steering wheel, cruise, control, air-conditioning, power doors, mirrors, and locks. In addition, eight-way power seats were available.

Under the hood, the carmaker installed the same 3.5-liter V6 as in the Vision and Intrepid, mated to a four-speed automatic transmission. Power went to the front wheels. 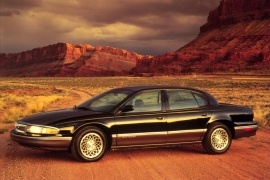