The 200 model was introduced in a troubled period for the American brand.

In the same year, the Italian car-maker FIAT bought the Chrysler shares held by the U.S. Treasury.

The rejuvenation of the Sebring was necessary to bring the Chrysler name on the covers of magazines. The American giant car-company was on its knees and every car sold counted for covering the multi-billion dollar debt where it was. The 200 range, along with the convertible version, came at the right time for that. But since the deal with FIAT was signed in July 2011, it is clear that the car was re-designed and re-engineered by the American team.

The outside styling was classy and elegant. It didn't look old as the Sebring and the clear headlights that incorporated LED for the daytime running lights were a welcomed improvement. The grille with chromed horizontal slats was a carry-over from the sedan version. On the sides, the door panels were sculptured and formed a nice ascending line to the rear of the car. The canvas-top was electrically retractable in 27 seconds. It wasn't the best time on the market, but it was acceptable.

The interior offered true seating for four adults even with the roof up. Finely detailed gauges and a classic-look for the analog clock on the center stack added a touch of elegance to the car. While the expensive materials were not used for the car, a clever design improved the car's feeling. 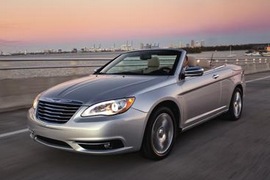 3 1972 Imperial Survivor Comes Out of the Barn, Gets First Wash and Drive in 41 Years