5 A Drone’s Worst Nightmare Has Arrived, and It Uses RC Frequency Disruption Tech
Up Next

Elena Gorgan
A Chinese laser fiber company claims to have created the weapon of the future: a laser gun that can burn someone’s hair or clothes, pass through glass and transparent objects from almost 1km away.
21 photos

It is light and precise, and would be ideal in riot-type scenarios. It fires invisible shots, which make it perfect if you want to have the element of surprise.

The same company, ZKZM, says that production on the gun is already completed and they’re looking for investments to start mass production, with hopes that the state police might want a partnership.

If these feats sound too amazing to be true, worry not: you’re not alone, most scientists around the world doubt the existence of the gun as well. To respond to criticism that they’re either exaggerating or making up the story entirely, the company has now issued a video aimed to “prove” the weapon’s existence.

You can see it at the bottom of the page. Bear in mind that the video is unverified, so it could very well be a fake. Even if it’s legit and it comes from ZKZM, it still doesn’t prove much.

The focus of the video seems to be the claim that it can cause burns from a considerable distance. It shows someone firing at targets and burning the likes of tires and clothes, but there is no indicator of the distance and you can’t really see any “shots.”

In the original story, the company said that the gun was non-lethal but could cause considerable pain. “[It can] burn through clothes in a split second… If the fabric is flammable, the whole person will be set on fire,” one scientist from the company said, under the cover of anonymity because of the magnitude of the project.

The weapon would be charged with a lithium battery and fire more than 1,000 invisible shots, with each one lasting 2 second tops. It could be mounted on cars, boats and planes, and even upgraded to a “laser cannon,” that would deliver a much heavier, deadly load.

Apparently, the ZKZM-50 prototype was developed by Xian Institute of Optics and Precision Mechanics at the Chinese Academy of Sciences in Shaanxi province, with technology from ZKZM. 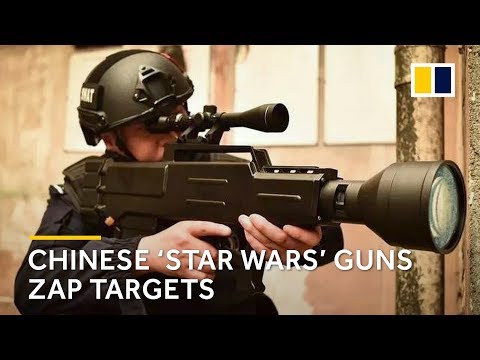