The New York Police Department has released a short surveillance video taken by an on-bus camera which shows an unidentified passenger laughing as he is pointing a laser at the driver's rear view mirror. The clip was made public in the hopes that somebody could help investigators catch the man, especially since it appears that the bus driver was injured and ended up in a hospital.
1 photo
It may seem like a funny joke teenagers pull off, but it’s not, for obvious reasons. First of all, if you’re a passenger on the bus, you may as well consider that fooling around with a laser pointer could put your own life in danger. Second of all, this is something illegal that can provoke eye injuries, which is exactly what happened with the Bronx bus driver, according to Ars Technica.

The foolish fellow is seen shining a laser into the rear view mirror while at the intersection of East 181st Street and 3rd Avenue in the Bronx. The suspect appears to be holding a red water bottle while laughing at his own stupid joke. The NYPD said the suspect “disembarked at an unknown location,” which is probably the reason they decided to make the video public. If nobody manages to identify him, the suspect will most likely get away with it.

Eye damage from a pocket laser is unlikely, but could be possible under certain conditions. For instance, the intensity of the beam varies significantly, especially since many of these “gadgets” do not comply with federal specifications. Some of them greatly exceed safety limits, thus causing harm to the person they’re pointed at. It appears to be the case with the poor bus driver, who ended up in the hospital.

In case you are wondering, the Food and Drug Administration’s Center for Devices and Radiological Health - that regulates light products, including lasers - governs these things. According to the Administration, a close reading of exposure limits indicates that a 5mW laser could cause eye damage. 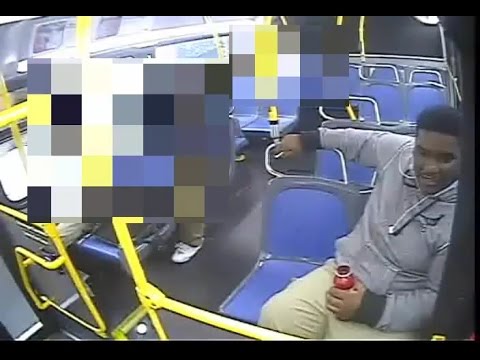