3 China Gets Mercedes-Maybach Models First, in S600 and S400 Guises

5 Volkswagen Lamando GTI is a Hot Hatch with a Coupe Body
Car video reviews:
Up Next

Su Daocheng, a 60-year old farmer from Hubei Province, China claims that he has found a cheaper way to harvest his crops, a robotic horse. A self-proclaimed inventor, the funny man believes his new four-legged machine doesn’t require any food or daily car, yet still is able to do the same things an actual animal would do.
1 photo
The weird machine rather resembles to one of the horses of the apocalypse if you ask us, but for the 60-year old fellow it might as well solve all his problems. Not only does Daocheng use the robotic-horse to plow his fields, but he was even seen riding it down the streets of Shiyan, central China’s Hubei Province.

The video’s description posted on YouTube claims the robot took about two months to be built and it's 1.5 m high, 2m long and weighs 250kg. And get this, the metal skeleton built out of chains is in fact powered by a go kart engine. Even though it uses gasoline, Su said the robotic horse is more economic than an actual horse.

Whether the Chinese four-legged robot will actually replace man’s closest animal in human history or not is rather a question of environmental issues and morality, than a question of science. After all, it’s been at least 6,000 years since man has first domesticated horses and we like to believe human beings will not stop using this beautiful animal as a great companion that it represents.

Hey, don’t get us wrong, we appreciate the man’s talent and all, but we should stay far from creepy when it comes to creating things our imagination comes up with. 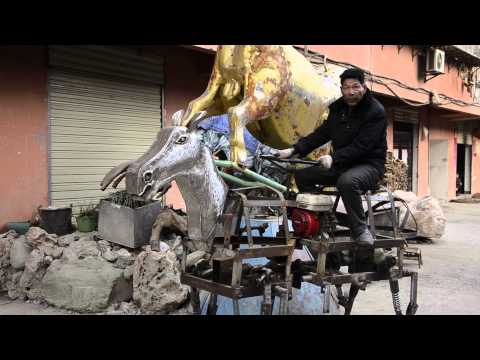