2 The Winnebago Magic Bus Is an All-Electric, Mobile School

Aurel Niculescu
Whenever you feel like the parenting skills failed you during a child tantrum, just think that sometimes things are not as bad as you think. Not the case here, though, where an 11-year-old has decided that joyrides can be had in the school’s big yellow bus... Police, of course, disagreed – and the parents now have a big subject of discussion among themselves after the kid got charged with allegedly stealing the vehicle, among many other violations.
9 photos

First and foremost, while you see the school bus has been through better days following the police chase ending in an inevitable crash, we can tell you that according to reports everyone involved is safe and sound. That includes the 11-year-old who caused the entire commotion, along with innocent bystanders.

The one that got really hurt is the bus itself, but it’s quite all right – steel can be unbent, windows can be replaced, and vinyl can be easily stitched back. According to local media reports, the kid from Baton Rouge, Louisiana, took the bus for his unfortunate joyride sometime Sunday morning from Progress Head Start on Elmer Street.

His shenanigans were caught early on, as passing drivers got wind of the youngling driving past them and called the Baton Rouge Police Department (BRPD). Still, he had some time for a scenic route, passing through town on Scenic Highway, Airline Highway and Greenwell Springs Road, among others.

The chase ended just as anyone could imagine – the kid ultimately lost control of the large vehicle and crashed the school bus into somebody’s front yard and into a tree. Multiple eye-witness reports have recounted seeing the school bus and the pursuing police car line – we counted no less than 13 police cars in a video posted on social media (embedded below).

Of course, the kid is now in big trouble, with the BRPD allegedly charging the juvenile with theft, aggravated flight, aggravated property damage, and more. Please, let this be a story of wisdom, and parents – take proper, loving, care of your children so they never get in a situation like this! 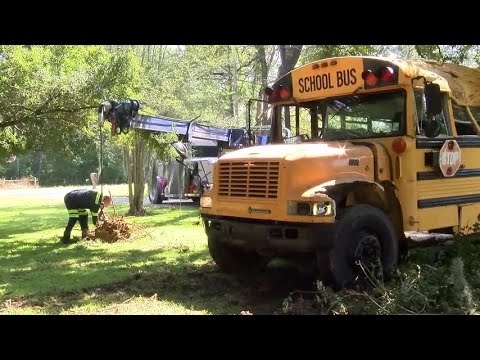