4 Honda Civic Drag Races Volkswagen Golf, Which One Would You Bet On?

More often than not I would rather watch a drag race between two equally-matched cars. Getting to see a photo finish is the cherry on top, and it keeps you connected to the whole thing. But sometimes, seeing two cars that are fairly different in terms of their specs can serve as an interesting comparison.
12 photos

Hennessey currently has two different packages for the Dodge Durango, the HPE900 and the HPE1000. I don't think it makes sense to pick the 900 over the 1,000 horsepower option unless it's a budget-related decision. Somehow, I feel this to be similar to deciding between a "Tall" or "Grande" coffee over at Starbucks. The Durango showcased in this video has the HPE1000 package on it, so it's got slightly over 1,000 horsepower and 969 lb-ft (1,313 Nm) of torque.

Only 50 of these cars will ever be built, according to Hennessey. And it's cool to see that they're throwing in a 2-year, 24,000-mile (38,624 km) warranty with the build. Today we get to see how a stock Chevrolet Corvette C8 stacks up against this Goliath of an SUV. When Hennessey first took delivery of the Hellcat Durango, they immediately pitched it against the C8. And that made for a very close race. The Durango would be first going off the line, but then the Chevrolet would come back into the game towards the end of the run.

But now the specs have changed, and the odds have followed. The C8 Corvette may be lighter at 3,366 lbs (1,526 kg), but it only has just under 500 horsepower and 465 lb-ft (630 Nm) of torque. So it's got a huge mountain to climb for this race, especially because the Durango has the AWD advantage. So, realistically speaking, the C8 Corvette doesn't stand a chance, and this is more of a "let's see how big the gap is going to be" kind of race.

For the first pass, neither of the two cars will be using launch control, but grip levels should be pretty good either way, considering the weather. You can't understand how fast the HPE1000 Durango is until you see the C8 being left behind from the very first moment of the race. Whereas last time the Chevrolet managed to make up for lost ground, this time the gap just keeps on getting bigger.

To even things out a bit, the C8 driver is told to engage launch control for the second pass. This time the Corvette manages to stay within range of the Durango, but the outcome is still the same. Admittedly, by the time a more capable version of the Chevrolet comes out, HPE1000 drivers might not be as eager to measure their forces anymore.

Even so, the folks at Hennessey have proven their point. The HPE1000 Dodge Durango is a formidable machine, even more so considering it has three rows of seats. If you've ever driven a fast SUV before, you know how strange it feels like, having all that bodyweight moving at high speeds. I guess that the HPE1000 Durango works just fine if you're driving on highways most of the time, and occasionally at the strip. But I'd still choose the Corvette any day. 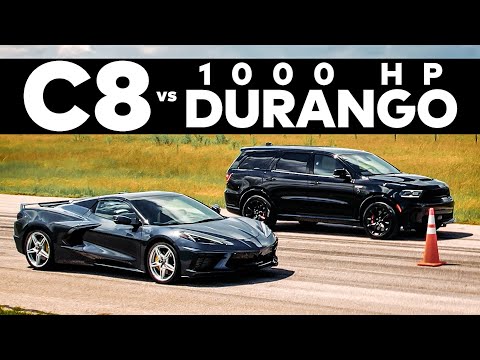