1 Tesla Model S Plaid: How Quick Is It Without the Launch Control Engaged?

2 These Audi RS6 Models Are Lit, Each With Its Own Set of Custom Wheels by Vossen

Dragos Chitulescu
We've just recently seen a head-to-head battle at Willow Springs Raceway. It felt interesting to watch the Evo struggle against the mighty Corvette Z06 in the time attack challenge. But this time it's all about straight-line acceleration, in a battle between the United States and Germany.
13 photos

I must admit that I've always liked the Corvette the most out of all the sports cars manufactured in the United States. And Chevrolet has nailed it with the new C8, this thing feels like a proper supercar right now! The C8 is still in its early stages, as production just started last year, so we've yet to see what Chevrolet can achieve with this platform. On the other hand, the BMW M4 has been around for 7 years, so the German manufacturer has had more than enough time to tune and tweak it accordingly.

Although these two cars come from two different worlds as a manner of speaking, their spec sheets are quite similar, except of course for the engine configuration. While the BMW M4 Competition featured here is packing a twin-turbocharged, 3.0-liter, inline-six engine, the Corvette C8 makes use of a massive, naturally-aspirated, 6.2-liter V8. Horsepower figures are quite close, at 503 for the BMW and 495 for the Chevrolet.

The M4 Competition tested here will set you back $101,995, while the C8 Corvette is just $80,660, destination charges being included for both vehicles. Sure, the German coupe may be more comfortable, and roomier, but if it's a pure driving sensation you're seeking, is it going to be better overall? It's difficult to make any kind of prediction at this point, but if I had to bet on something, I'd most likely go for the Corvette.

The two cars line up for the race, and something unexpected happens. The BMW goes for an early start, as it starts flooring it before the "go" signal is given. And with that slight advantage at the beginning, it manages to stay ahead across the finish line, scoring its first victory, albeit an arguable one, of the day. They go at it one more time, and with a clean start, it's the Corvette that lunges forward into 1st place.

This makes for a very close race, and nobody is gapping anyone here, but it's the naturally-aspirated V8 that scores the win for the second run. For the last two runs, the drivers decide to go for a rolling start procedure instead. When the time comes, the M4 Competition feels like a different machine and wins the third run without any room for interpretation. Nothing changes on the fourth run, and the BMW scores its third victory of the day, thus settling the dispute. 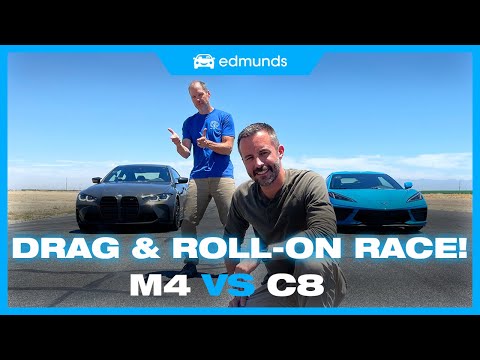